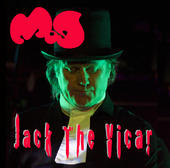 I am relieved that some bands don’t feel the need to put their feet harder down on the metal pedal to become known as a neo-prog act. I am very pleased to inform you that Mog are one such band and recorded an album that melts traditional prog ethos with interesting rhythms and lovable madness.

Drawing on their considerable experience gained with various bands from the late seventies and eighties , founder members Phil Swinburne and Lewy Richardson have created something very special to listen to. It is very uplifting to see a band putting theatre back into music.

Having witnessed Mog playing Jack The Vicar live I thought it would never lend itself to hard copy due to it’s theatrical production values. I am pleased to inform all how wrong I was. From the very outset of the album sensibly entitled “Jack, The Beginning” the journey twists turns never leaving time for boredom to set in.

“Big House” is shear joy to listen to with a bass line to die for. Indeed Gavin Bell’s bass playing throughout is rock solid and not for the faint of heart. Giving way to a chapter of the story representing Jack the Vicar’s disillusionment with war and all that goes with it “Glory War” and “War Boy” move the band into an area usually frequented by Roger Waters.

There are so many musical styles present throughout “Jack The Vicar”. You can hear traces of the damned and U2 as well as the usual prog suspects. Yes, it really is that varied. I praise the album for not being over polished and truthful. Mog have to be commended for spurning false dialect in place of originality in much the same way that The Proclaimers did all those years ago.

Holding true to their Northern roots, Mog enlisted the narration skills of Mick Crannage which adds another dimension to the delivery of the tale. It would have been very easy to have found a Richard Burton sound alike but in my view the honest earthy approach simply works a treat again making the whole project more original.

Mick Crannage’s Northern pronouncement gives way to “The Awakening” finding Mog in a more tribal groove.  After such an outing with heavy electronic percussion and almost chant the pace was lessened to make way for what is possibly the best song on the album “Mother Midnight”. On first hearing this lilting ballad the listener could be forgiven for thinking Moby had teamed up with Gerry and the pacemakers.

We are informed that Mother Midnight was indeed a witch dating back to the seventeen or eighteen hundreds. All very relevant we assure you. Hopefully we can be more clear about this when we track the boys down and get chance to interrogate them about the whole thing so watch this space. This song is far too short for our liking.

The title song is a great jaunty, music hall stomp of a piece and does justice to the albums title and concept. It is fun and light hearted adding just a little humour to the proceedings. “The Emperor” Slows things down a tad just in time for a suitable finale in “Kingdoms End” which is a suitably rousing end to a modern takes on a Victorian adventure. There is a lot of what used to be called music hall on this album. The songs are strong and very memorable. “Jack The Vicar” is an album of songs best listen to in their entirety and not in solitude. What the hell it’s all about is anyone’s guess. As soon as we find out we’ll let you know. In the meantime though, my suggestion would be to click on to Itunes and treat yourself. It’s ridiculous that you could download the whole album for less than the price of a couple of pints.

Mog are in the studio working on their next album as we speak. If it’s half as good as this one you’ll find it at The Progmeister house. Check them out.