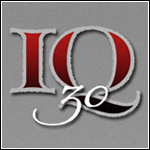 One of the best prog bands in the business are playing shows to celebrate 30 years of sevice. The Progmeister will be attending their gig at Leamington. People attending the Leamington gig will receive a free CD so hurry and get your tickets now.

Well, what an amazing evening. It could well have been the best IQ gig in many years? I am still reeling from the impact and velocity of their 30 year anniversary gig in Leamington Spa assembly rooms. IQ at their very best. A full review of the concert can be found on the review page and a transcript of the interview conducted by The Progmeister just prior to their incredible performance will be posted soon. Still the best 30 years on!