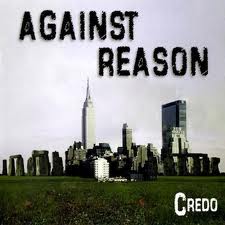 I compose this review as a very impressed Credo newbie. Until now I had only heard Credo by name, I had until today actually never heard their music. This CD, their third is a shining example of 21st century progressive rock. It has all the hallmarks of classic prog shifting time signatures, exemplary playing, good varied material and solos none of which are overstated and entirely relevant to the feel and timbre of the music.

The album begins with a nice keyboard intro and were off ‘Staring at the sun’ a cracking opener in which an addictive chorus and some great guitar playing take us on a journey to a place on the edge of destruction. Mark Colton weaves a tale of apocalypse, his impassioned vocal enraged by what is happening around him. This is an excellent opening track with its it’s blend of musical accessibility and a stern warning to us earthlings to think about our planet and our future.

The following track Cardinal Sin is another very strong track, this song discusses blowing the whistle on abuse . Its a superb rollercoaster of a listen, twisting moods an epic piece indeed. Intimate Strangers follows its a slower paced track with a heartfelt vocal performance embellished by some lovely keyboard and guitar work.

Next up is the instrumental title track Against Reason mystical and eastern influenced, it reminds me very much of another favourite instrumental track of mine Arboressence by Ozric Tentacles, absolute quality.

“Insane” follows with its themes of religious and political extremism. The band deliver a very strident and powerful musical backdrop (listen to the guitar in the latter part of the track) while space is allowed for the musical flexibility which is the cornerstone of the prog genre. Another great vocal performance gets the message across no problem The theme and performance of this song are very strong, once again Credo makes you think.

A shorter track Reason to Live brings the pace down a little but this doesn’t mean that any power is lost. This is a nice melodic song that makes you feel that at some point the music will break loose but the band keep it restrained achieving a beautiful warm musical atmosphere.

Conspiracy (MCF) deals with exactly that, conspiracy theories Did man walk on the noon? What happened at Roswell? How did Marilyn die? This ten minute track is a full on album highlight featuring another great vocal and excellent keyboard and guitar work throughout.

The album reaches its peak with the epic closing track Ghosts of Yesterday. Not as instant as some of the other tracks, it starts off in a laid back mode gradually building to an anthem like finale and features some really nice acoustic piano playing mid-way through the track. This track will benefit from repeated listens.