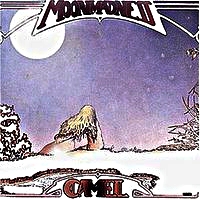 As promised, the first of Camel’s incredible albums to be reviewed is Moonmadness. Please don’t read anything into that because as i said in my recent article i cannot possibly nominate a favourite. Such notions would ignite personal mental anguish, turmoil and indeed, guilt.

Available in many forms with extra tracks and remastered options for CD, let’s stick with the one that i bought from a record shop in 1976 shall we? Having already attended the promotional gig only nights before at Newcastle City Hall before, i had a rough idea of what to expect. What i didn’t expect was such a quality item from such a relatively unknown band. From the quality of the sleeve to that of the production. I found myself quickly addicted to this album, literally tearing me away from the hot new releases of Genesis and other such bands.

From the burgeoning march of opening piece “Aristillus” lasting just over a minute and a half to the closing emulation of aircraft terminating the seat of the trousers ride of Lunar Sea, I was smitten. What was this music i was listening to? Rock, space rock, prog, blues? Label it what you will, at this stage in life i didn’t much care. What ever it was i was listening to, i was simply blown away.

Having the benefit of information that we all now have, i am now aware that different tracks on the album represent their owners, but in 1976 i cared not a jot. Listening to The opening bars of Aristillus lifts you into a higher plain of wanting more and that’s just what you get. The first half of “Song Within A song is a lilting flute driven melody giving way to a very early incarnation of a string synthesiser being played through some kind of device giving the whole impression of space. The whole piece culminating in Pete Bardens Mini Moog/String synth crescendo. Fabulous.

Next through the crackles and pops is Chord Change. Three if i’m not mistaken? Furious jazz beginnings mellowing out at it’s mid point to a gorgeous blues down tempo middle section only to be mesmerised by the guitar,organ, drums and bass synergy at the end. Spirit Of The Water is an airy Pete Bardens tune that i didn’t fully appreciate until i got older. It’s a haunting melody that i think was a fitting conclusion the the first side of the LP. Up off me bum and turn the record over.

Side two. “Another Night” Apart from representing the character of Doug Ferguson the first Camel bass player, it’s a bit of a rocker. Probably the only one on the record. Leading into what i think is the most beautiful track on the album, “Air Born”. At a guess i would say that this is about Andy Latimer. This is the track that swayed the album away from full blown prog and placed it on the fringes of space rock. If you take the time to listen to the swathe’s of string synthesizer and bleeding guitar notes emanating from the flute and piano intro, you will know where i am coming from.

Just when you thought you were astounded, you are greeted with the mighty “Lunar Sea”. Little can be said of this track other than “Pheeeeewwwww”. Difficult to pick out the star of the show in this amazing tour de force. It’s very easy to site Latimer’s olympic standard guitar and Pete Bardens extraordinary keyboard textures but for me too much praise can’t be given to the rythmn section. Without doubt holding the whole piece together was Andy Ward on drums and Doug Ferguson on a big old Fender bass of whom praise cannot be offered high enough. With all the oodlings of people blowing down tubes and making bubbling noises and a bit of jiggery pokery, this album is nothing other than special. In many ways i think it is Camel’s most intimate of their early albums.

In many ways it is a trip to Ronny Scott’s via the Sea Of Tranquility and should be treated with reverence.  Whether you listen to Moonmadness on a big all valve hifi system or a super-fast all solid state bobsleigh hi-f, it just sounds fantastic. The newer CD options are all well worth the money and contain lots of bonus material. Any which way you get to listen to this album it still sounds amazing. Diamond status.