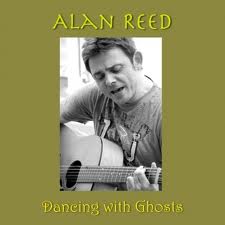 I must admit to knowing little about Alan Reed before receiving his promo download of Dancing With Ghosts. An EP containing five excellent songs by ex-associates Able Ganz and Pallas as well as two new original songs. Starting with “Sanctuary (The Return)”, the original of which harks back to 1985’s “Knightmoves” EP by Pallas, the 2011 spring cleaned and dusted down version sounds clean cut and finely etched by comparison. Despite its fairly high resolution the song retains a beguiling nature and contains a keyboard patch I haven’t heard for many years. Indeed the keyboard sounds augment Alan Reed’s voice beautifully throughout this piece lending the only hint of a prog heritage on the whole of the EP.

The instantly memorable “Who’s To Blame” represents a folk ballad methinks and it is here that Mr Reed proves himself to be more than a vocalist. He is also a great guitarist and wordsmith. The depth and timbre of his guitar sound is exemplary and the sitar sound generated in some way by Mark Spenser adds a great touch to an already delightful song.

Although I dislike comparison and avoid it whenever I can, I couldn’t prevent myself being reminded of the Beautiful South and Gregson/Collister whilst listening to “Kean On The Job”. Jennifer Clark’s sumptuous double bass also reminded me of Mary Black’s rhythm section. Mark Spenser’s somewhat muted piano interlude insinuates that room has been left in these compositions and presented as something of a sketch which with no doubt will later include a full palate of colour and texture.

A sheer delight is the naked transparency of “Teardrops In The Rain”. Bolting headlong again into  folk and dispelling all notion of a prog artist gone array, Alan reed displays astounding vocal range laid bare and untreated my means of digital interference or otherwise. Keeping with the theme of simplicity, the earthy and somehow Scottish sounding “Begin Again” finds Alan in protest mode employing Scott Higham’s (Pendragon) percussive talent to hammer home the lyrical message supported by the apt and powerful Boderan. The vibrato in Alan Reed’s voice in this song being very reminiscent of Men At Work’s Colin Hay.

Some or all of these compositions are destined for inclusion on the forthcoming “First In A Field Of One” album and as such will receive a makeover and a grandiose production. As they are now they represent uncut diamonds and I for one see the beauty of their raw nature and have no hesitation in advising their acquisition immediately. Hopefully more thought will be given to artwork and presentation as the mundane nature of the picture included with the download leaves a lot to be desired. We look forward to hearing the new album very soon.