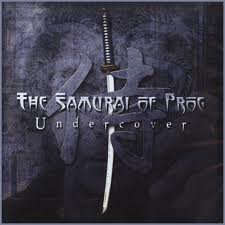 The Samurai Of Prog – Undercover

Covers of classic works tend to leave me underwhelmed at best and downright appalled at worst. Over the years there has been some shockingly bad prog covers to exceptionally good ones. Colin Bluntstone’s rendition of the Genesis classic “Absent Friends” represent the latter, so it was with some trepidation that I unwrapped and examined the latest offering “Undercover” from Finland based coalition The Samurai Of Prog. I must admit to being a tad ashamed of myself as I had pretty much fallen victim to my own thoughts and preconceptions. That said, this album is best enjoyed in the presence of you, your soul and memories of better days. So for full enjoyment of the album don your Ben Sherman, tank top, flares and platforms, switch on your lava lamp and sit back with a bottle of real ale.

Like many of you I suspect I had never heard of The Samurai Of Prog until this nicely packaged CD arrived from Finland for review. It is hard not to be impressed when you read through the beautifully put together CD booklet. Eight of the fourteen tracks included on the album are covers whilst the remainder are original compositions albeit from different incarnations of the band. TSOP are in essence Marco Bernard armed with his Rickenbacker 2004 bass and multi-instrumentalist Steve Unruh playing guitars, flute, violin and vocals. Such a venture needs the best musical augmentation possible and throughout the album a whole army of serious prog warriors wielding Moog’s, Mellotron’s, Bosendorfer piano’s indeed anything that they could get their hands on.

Starting with “Before The Lamia”, an intro to the following “The Lamia”, David Myers deft of touch with the afore mentioned Bosendorfer piano really makes you think, hey, these guys aren’t messing. At only 2:08 minutes long the round and crisp piano sound gives way to one of the most underrated sections of the 1974 Genesis album “The Lamb Lies Down On Broadway”. Joined by Flower Kings and Transatlantic guitarist Roine Stolt I never once thought of the band trying to emulate the original players. Instead I was given the impression that such important and classic prog songs had been given a spring clean and a new slant. For example, I could understand every word of the lyrics without looking at the album cover.

It isn’t just the songs that come across so well, it is the choice of songs that set this album apart from other such attempts. Yes classic Starship Trooper, Marillion’s “Assassing” Flower Kings  “World Of Adventure” all seem fresh and interesting. Pink Floyd’s “Dogs” from their Animals album included Nathan Maal keyboard guru Guy LaBlanc and benefits from a modern approach. Elsewhere there were some minor disappointments though on the whole they pale into insignificance. Of the original songs on the album my favourite by far was “The Promise” written by drummer Kimmo Porsti. Kimmo himself plays everything but the kitchen sink on this fantastic morphing of prog and folk with a cast resembling the final credits of Star Wars. I think it ticks all the boxes and well deserves an audience.

Many albums of this nature make their way to Progmeister Towers and only very few ever provoke a comment. With the exception of Antony Karlugin ( Karfagan ),  The Samurai Of Prog are perhaps one of the best I have heard at merging the classic prog sound with an element of more traditional instrumentation in a folky way. If you want something a little different and something that will please you in both a nostalgic and an exploratory way why not venture into the world of some great musicians creating some great moments. Money time and effort has been poured upon this project and it shows. I think it will divide opinion though I think it worthy of a fair trial. I was very pleasantly surprised.

Undercover is available from….