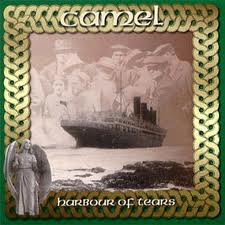 The third album under scrutiny as part of the Progmeister Camel feature is Harbour Of Tears. It’s not until you reflect upon the huge body of work that Camel have recorded since 1972 until 2002 that you realize the diversity of their whole output. From their raunchier beginnings to the sophistication of the latter HDCD recordings, everything from blues to light hearted pop songs cross the range. For such things you only need to listen to Breathless and I Can See Your House From Here.

Many of Camel’s albums however were to be taken a little more seriously, None more so than Harbour Of Tears. Of all the albums recorded under the Camel guise this is perhaps one of the most passionate, emotional and personal projects that Andrew Latimer ever recorded. Apart from being ambitious, the bleak story expressed in at times Gilbert and Sullivan fashion is quite simply astounding.

A brief synopsis of the tale portrayed is to be found on the back CD cover. It tells of a deep water port in county Cork, Ireland, from where many fractured families left to seek fortune or fate in far off places. The album is dedicated to Pan, who ever she may be (answers on a post card please) and leaves the listener to put their own interpretation on the tale.

From the opening traditional Gaelic lament of “Irish Air” to the haunting conclusion of rolling waves at it’s conclusion,

Harbour Of Tears is one of the most beautiful and compelling albums that Camel recorded. “Irish Air” is delicately sung by Mae McKenna and the song is reprised immediately following it’s conclusion by the most bleeding and heartfelt flute and guitar intro’s I have ever heard on any album. In true operatic and of course progressive style there is only one pause between tracks throughout the whole of the performance.

Following such a wonderful opening the story is told in very concise terms in the title song. Singing in descant messrs Latimer and Bass describe the sorrow of a passenger setting sale and his father on the quayside bidding them farewell, very eloquently done.

Moving into the next piece “Cobh”, Mickey Simmonds with his talent for timbre and motive brings about the first of a few symphonic elements to this fabulous opus and leads in quirky fashion to the jaunty and almost shanty-like “Send Home the Slates”, sung with aplomb by David Paton and Andrew Latimer  which sets the nautical feel for the remainder of the album.

“Watching The Bobbins” is very much in blues tempo which gives way for some of Andy’s most soulful guitar playing and stirring keyboard orchestration. “Last Eyes Of Ireland is the beginning of perhaps the most powerful and emotional segments of the album and at one stage gets eerily close to sounding like Genesis.

Last of the songs on this what I now consider to be a masterpiece is “End Of The Day”. It is a tranquil lament, this time with the more masculine tones of Andy Latimer himself.  Coming of age is Camel at their best with the distinctive signature that gives the essence of what they are all about. Drama, poise and excitement are all contained herein.

Which brings me to the concluding piece, “The Hour Candle”? Something tells me that although this blistering guitar tells not only the tale of heartache and sorrow for the people portrayed in the story, but of the grieving of a musician who at the time had lost his father Stan to whom the song is dedicated. This beguiling suite is further augmented by the inclusion of the afore mentioned sounds of the ocean lapping at the shore. A fitting end methinks.

I have mentioned not a jot about the supporting musicians on this album of which there were many. The two people that by now had become the nucleus of Camel, Andrew Latimer and Colin Bass who were ably joined by the extremely talented Mickey Simmonds on keyboards, David Paton/bass (Pilot/Alan Parsons Project) and John Xepoleas on drums. As well as some snappy dudes on Violins, Cello, Oboe, Sax, French horn and Harmonium, I think you get the picture? For further information buy the album and read it for yourself!

When in 1996 this album hit the shops it was being closely compared to its predecessor “Dust And Dreams” which too was grossly symphonic. At the time I suspect that many Camel fans were craving a return to the individual song format that would not return until Rajaz. As a result I believe that “Harbour of Tears” didn’t get the appreciation it so rightly deserved.

I would describe Harbour f Tears as Camel’s most organic album, and you really must get within its skin to enjoy it. It’s about mood, atmosphere and passion unlike any other Camel record. It represents the struggle and suffering of the many people in the story and to a huge degree the feelings at that time of its author.

Over the years I have heard so many Camel fans list this excellent album so far down their list of favourites it leaves me baffled.  I am always loathed to express a favourite Camel album and I have to say that Harbour of Tears hold its own in the company of the rest. With the benefit of maturity and a healthy appreciation of life, health and a broader understanding, I would consider this a must have Camel album. But then again, aren’t they all