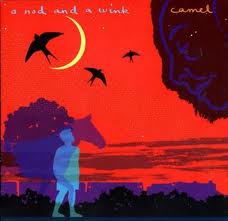 Camel – A Nod And A Wink

I have to admit to writing this my concluding Camel review with a bit of a lump in my throat. A Nod and A Wink takes us into the millennium years and with many of us showing the signs of aging. Unbeknown to the majority I dare say, A Nod and a Wink take us into a fourth decade of Camel’s rich tapestry. As we ponder the universe I am unsure as to whether this is Camel’s swan song in much the way as all the rest of us.

If so, a more fitting a revelation there will ever be. This is very much an album for the devout Camel fan and for those who know of their heritage and meaning. I count myself as being one of the fortunate. Time has been spent on making this crafted presentation a very special message. The key is in the title!

A Nod and a Wink is just that…A nod and a wink to all the musical forms and influences so enjoyed by the composer of these finely penned tunes and ditties. I hear them all. Genesis, Caravan, Jethro Tull. It really does reward the listener if time is spent becoming familiar with each composition and lyric on this album.

Unlike many Camel albums A Nod and A wink can be listened to piecemeal. Individual adventures for you all to savour.  Looking at the cover of this album it says everything. The silhouette of the composers faces the glance backwards at his childhood, the steam train moving forward through life and of course the sky.

On first hearing this album it give me a feeling of terminal inevitability. Dedicated to the world from someone who wanted to demonstrate their passion for their influence’s, loves and concerns to the need of composure and realization.

Loading this CD into your preferred method of delivery you will notice a more delicate feel about it. Every note on this album is played with conviction and meaning. It lays bare the soul of it’s creator and the intent to persuade the listener of its representation.

My personal view is that of an Enid Blyton children’s novel. Lashings of ginger beer and the famous five etc, of course, it’s all open to individual interpretation.  What this album does have in spades is magic.

Most unlike any other Camel album A Nod and A Wink Demonstrates a cheeky view of the world and not least the musical influences it alludes to. Beginning and ending with the sound of a steam engine drawing near and then in its conclusion moving away into silence.

Glockenspiel and slide guitar, not the usual ingredients for a Camel album but very enjoyable none the less.  Tearing a way through ZZ Top like slide guitar to reveal some timid synthesizer sounds from French Canadian boards man Guy Le Blanc the title track blazes it’s way to “Simple Pleasures” which is probably the most exhilarating song on the album.

“Simple Pleasures” demonstrates the benefit of HDCD encoding and is beautifully recorded. The weaving guitar in this song is bolstered by Colin Bass on fretless bass and the powerhouse drumming of Terry Carleton. It is with Terry Carleton’s huge tom toms that the track begins and thunders to a conclusion. It really is a treat.

“A Boy’s Life” begins in a very solemn mood though soon becomes a little more interesting with a little Roger Waters time sound effects and again some pyrotechnics from the drums. Finishing in rousing fashion this song possesses a huge sound stage. There is some nice acoustic guitar to be heard on this song too. I must admit to being unable to understand what this song is all about, though I would suspect it’s about childhood and how we take everything for granted at the age of fifteen yet there is always the boy in us until we die.

On a more equestrian theme the fabulous “Foxhill” is a right old romp and brings about a light hearted feel to the proceedings. A song about the joy of foxhunting! Could there be such a thing? Worry not young activists, because it’s a tale with a happy ending as the fox gets clean away. Genesis meets Jethro Tull here. Wonderful English feel to it this piece. It makes you want to take up riding. There is some fantastic guitar/keyboard interplay on display which is only to be expected. It is something at which Camel in their many forms excel at.

“A Millers Tale” and the following piece “Squigely Fair” seem to fit nicely side by side as if the latter was a continuation. “A Millers Tale” begins with some full bodied acoustic guitar and appears very dark and moody. This is further enforced by the rasping cello and oboe samples and invoking a Lord Of The Rings type atmosphere. “Squigely Fair does much the same, though in a happier more breezy type of way. All the fun of a fair is here in spades. And all thee rides and attractions are represented by the multitude of talent playing guitars, flute and some great percussion. A fitting high on which to end and allow the Ice like tones of the concluding and thought provoking “For Today” begin.

To me this beautiful piece of music is almost hymn–like. When you consider it’s subject matter which I believe to be the tragedy that befell the world in September 11th 2001, you realize that it is probably the post powerful and emotional song that Camel have ever recorded. Should this album indeed be the bands swan song it is a fitting one. With an eerie message the song climbs from its subtle piano intro into to burning guitar crescendo backed with a chorus “never give a day away, always live for today”. Stirring stuff. A fitting conclusion to what may as yet me the last Camel album. The guitar sound on this song could easily be mistaken for Pink Floyd should you be unaware of whom you were listening to.

I was also very pleased to see that a dedication had been given to the late and very great Peter Bardens on the CD booklet.

Well, there you have it. Four decades of Camel’s music represented by Moonmadness, Stationary Traveller, and Harbour Of Tears and last but certainly nowhere near least A Nod and a Wink. This then is the conclusion of my look at Camel and their influence on me, my friends and colleagues. I can only hope that there is more to come and this dear friend’s is a hope of which I will never let go.