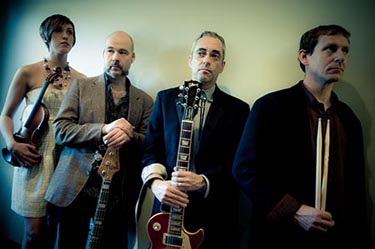 Looking for a little different ? this album could be just what your looking for.  ”The Intergalactic Cowboy Orchestra” are (on this album) a four piece instrumental band who play an eclectic blend of music ranging from folk to progressive, esoteric to grunge and country to raga.

As the band were unknown to me before I received the album to review, I played the album a few times to get the feel of what the band were about.  At first, I struggled with the album but after the third listen I began hearing a plethora of nuances in the music. I have to add here that the musicianship on the album is of a very high standard and is not overplayed or pretentious in any way shape or form. I can honestly say that every track on this album is unlike the next. The range of musical styles is vast, this has the listener wanting to know where the band are taking them next.

I’m not wanting to write a blow by blow sort of review but the highlights of this album are ”Minor Scrape”, ”Slow Pour”, ”Raga Piloo”, ”The Biscuit Breakdown”, Odd Men Out” and the very out there ”Dark Matter”.

As a progressive rock fan who clearly remembers the classic seventies progressive scene, listening to the music on this album reminded me of how many bands from that era who I love that have violins, violas or fiddles in their line-ups. I don’t know if the band are influenced by any of the bands of this era but in this album I have heard similarities to Caravan, King Crimson, Jerry Goodman and Jean luc Ponty all pioneers or progressive, jazz fusion and experimental music.  This is why I feel the album may be of interest to fans of progressive music.  I feel that this band would be a great live act.