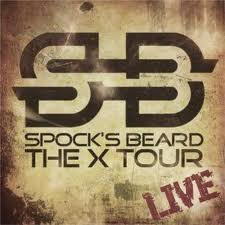 Spock’s Beard are without doubt one of the best live bands i have seen and my views of their latest album X are well documented elsewhere in the album reviews section. However, playing live is much more their forte. Under scrutiny here is the limited edition delux version which includes two CD’s and a DVD. CD one contains the songs from X whilst Cd two is the second half of the show containing some older gems. The DVD is good as a visual document of the X shows, however, it does give the impression of being a warm up gig.

In the light of recent events with regard to Nick DeVigilio’s departure for pastures new the DVD really is a good keepsake to have. That said, picture quality is best described as adequate. I see a trend developing here. We had similar views of the recent Steve Hackett live CD/DVD package. This does not detract in any way from a fine performance which holds some great vocal harmonies and at times highly charged moments.

Whilst the CD’s are a better option for the hi-fi lovers amongst us favouring overall sound quality, the DVD is a more enjoyable event bringing the extra impetus to a great gig. The stage is littered with all the things that make prog so special, Moog’s, Mellotron’s, huge drum kit and other paraphernalia. Yet for all that there seems to be a kind of sparsity about the proceedings. Lights and such like seem to have been cut back to a minimum. this is made up for in spades by the sheer raw energy by all involved. Ryo Okumoto is as ever a joy to watch though it has to be said that it would be hard to choose the man of the match such is the high standard of each musician.

Kicking off with “edge Of The In-Between” NDV was in fine form and along with being a mijor talent will be a major loss to the band. Highlights from the X album here were without doubt Ryo’s “Kamikazi” “TheQuiet House” and the concluding X song “Jaws Of Heaven”.  The beginning of the second half of the show was left to NDV and tour drummer/backing singer Jimmy keegan displaying their percussive skills moving between drum kit and floor and hitting everything in beween with their sticks. I wasn’t so impressed with such gimmickry and relieved when the opening bars of “On A Perfect ” rang out. This for me was easily the best song of the whole DVD though it was followed closely by “The Doorway”.

The DVD also contains an extra track “Their Names Escape Me” which is very enjoyable. Packaging and presentation is to the usual SB standard and a must for any fan, even more so for any serious Prog fan who basks in the pomposity and excesses that comes with the territory. There is little finess about the performance and having watched it for at least three times it becomes apparent that it benefits from just that. Of the DVD’s i reached for lately when i needed a fix, it was this one. I have no hesitation in recommending this excellent package. Of the negetivities raised none would put me off buying a copy, indeed i would suggest that the extra money spent over the CD only version is a necessity. If you have never taken time to explore the vertues of Spock’s Beard this would be a good place to start. the next chapter of their history will be filled with intrigue.

Available from www.mascotlabelgroup.com and costs 15 Euro’s 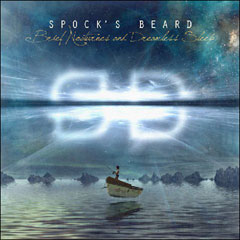