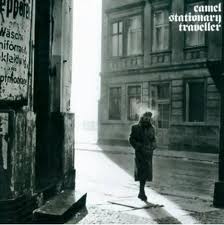 The second album review as part of the Camel feature takes us from 1976 into the 80’s with 1984’s Stationary Traveller. As with my previous review i will for the reasons of nostalgia be refering to the vinyl copy of this album and not the remastered and extended CD et al.

However, i do feel it a great shame that “In The Arms Of Waltzing Fraulines” did not appear on the record or indeed until much later on an afore mentioned format. On first listening to this album i did feel that the subject matter was a little stuffy and to a degree insular. As i became a little more enlightened and more interested in modern history i became hooked on both it’s sentiment and values. The cover itself invokes a very desolate, desparate and despondent post war Germany. A solitary young woman amidst the aging architecture of a city scarred by war and it’s numerous effects.

“Pressure Points” is a fabulous way to open such a theme. Full of technique and technology of the day like the Fairlight sampler etc, which Camel borrowed from Kate Bush. Though many new and interesting people appeared on the album Andy Latimer’s blistering guitar style shone through like a diamond cutting through glass. And this opening barrage of highly strung guitar and emulated clavinet/Mandolin sounds soon gives way to a warm and seductive Wal fretless bass played by the genius that is Andy Latimer himself.  “Refugee” moves on a pace with the first of the songs on the album that Andy Latimer’s voice slips into a Bob Dylanesque type slurr. I think it became one of the first albums on which he sung in such a way. It did give the song a very protesting feel about it. The song itself is very much a protest and is conveyed as such. The song includes a guitar break in which Andy uses the volume knob on his Fender Strat to swell the tones in the same way as some others used to use pedals of various designs. This would late become a signature sound in Andy’s style.

The next track takes a sinister turn. “Vopos” is about the unforgiving border type German police which to a degree carried on the mantel of the Gestapo and contains some of Andy’s best guitar licks. “Cloak And Dagger Man is the first time you get to hear Chris Rainbow’s voice on the album and i think he’s absolutely great. I don’t know why but Scotsman always seem to make the best singers. This shamelessly synth driven song is catapulted skywards by Ton Scherpenzeel’s twent five finger exploits on the Roland Juno synth. The very first time i have heard such an E.L.P. type keyboard sound on a Camel album and it was quite refreshing.

Finishing the first side of the album is the title track. It is one of the most haunting that Camel ever recorded. As well as one of the most beautiful guitar pieces the band recorded Andy plays Pan Pipes which add to the Europeam mood of the album and plays out with a rousing guitar crescendo. Turning the record over and listening to the B side, “West Berlin  maintains the Michael Caine espionage feel of 50’s and 60’s poat war Europe. Made so by the many keyboard textures and imaginative voicings there of. “Fingertips” is one of my very favourite Camel songs and brings back happy memories of me dancing with my daughter who then but a baby. Mel Collins superlative saxophone augmented by a clutch of the best musicians in the business.

“Missing” and “After Word” are two instrumental tracks again utilising sounds and textures befitting the history portrayed. “After Words in particular being a very haunting, piano lead slowing the album down sufficiently for the opening of the final song “Long Goodbyes”. Only Chris Rainbow could have performed this song with such aplomb. The shear beauty of this song is carried along by the innocence of the acoustic guitar in comparison to the many items of electronica used on the album. A fitting crescendo to a brilliant album and a fair one for camel to represent their limited output in the 80’s. I urge you all to revisit this album. It’s quite simply a treat.