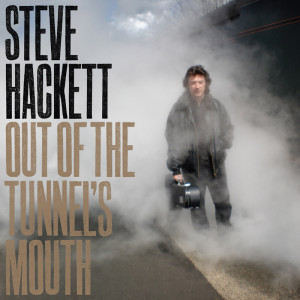 Steve Hackett – Out Of The Tunnel’s Mouth

I am constantly amazed by the advances in musical technology. This wonderful album by Steve Hackett is testiment to just how far things have come in that respect. Recorded without the elaborate surroundings of a studio it suffers no ills what so ever. If anything the recording quality puts to shame a couple of Steve’s earlier albums. I sense that some of the lyrics are of a personal nature none more evident than the opening track “Fire On The Moon”. All the traits of a bygone era are here with a different edge to them. Gone are the huge soft Mellotron passages and fat bass pedal sounds. This is a cleaner more focused sounding album majoring on variation. Something of which Mr Hackett does extremely well.

There’s something in here for everyone. Listen to Nomads and you realise that Steve has blended his virtuoso classical style directly to his more rock influenced style, rather than individual classical or rock pieces. Nomads takes you from a haunting round a campfire, through flamenco, to rousing drum cressendo. Emerald And Ash reviels a gentle side to Mr Hackett, whilst heard before he captures a new grace. The following Tubehead is just to make sure that you know you’re listening to a Steve Hackett album. No finery here, this is not to be listened to as back ground music. Not for the faint hearted. Sleepers on the other hand brings about a dimention to Steve that was explored on the Wild Orchid album.

I honestly think it’s the violin and viola playing of christine Townsend that make the first part of this song a little special. It does however change pace with Steve’s nightmare sequence type playing halfway through. The following “Ghost In The Glass” seems to have taken over where “Spectral Mornings” left off. A showcase of Steve’s abilities. The penultimate Still Waters reminds all that Mr Hackett does the blues. With a little help from his more feminine friends he manages to cut through iron bars with the searing nature this wicked tour de force. Last but not least, “last train to Istanbul”. heavily influenced by Turkish music a dark mood of Eastern promise is set by Roger King’s deep impacting drum pads and patches and Rob Townsend’s earie soprano saxophone.

Musically there has been no tunnel’s for Steve to imerge from, though it seems he has suffered some personal dark times. This album is a credit to his professionalism and determination to continue recording and playing quality music. It goes without saying that this album is a must for all Hackett fans but in my opinion it has a much wider appeal than some of his other work. It’s a diamond. If you have just bought yourself some new hi-fi equipment and want something to play on it, look no further.   Well, what yer waiting for?