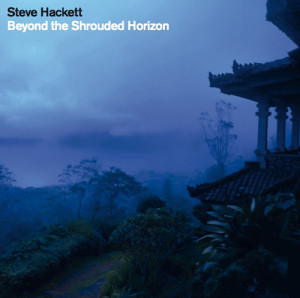 Steve Hackett – Beyond The Shrouded Horizon

Continuing the multicultural musical landscapes of “Out Of The Tunnel’s Mouth, Steve Hackett returns to the more elaborate environment of a recording studio in which he created a diamond of an album “Beyond The Shrouded Horizon”. Recruiting extra musicians apart from the usual suspects Steve really has drawn from his own musical heritage as well as continuing his passion for including textures and rhythms from other continents to further extend the boundaries of his previous masterpiece.

Given Steve Hackett’s proven track record with classical acoustic guitar pieces and delicate touch with such an instruments it can become very difficult to pin him down to any given genre. What we have here is Steve revisiting some of the most inspiring eras of his entire career whilst remaining true to his most recent approach to structure and scale. Realising the need to retain quality, trusted personnel around him as core members of his team, Steve sensibly augments this latest project with musicians exerting their own influence and flavours on what is an already winning formula.

The wonderful thing about reviewing any work by Steve Hackett is that any comparison to his latest works can only be made to his own repertoire as he is not only unique he is an innovator, less an influenced musician more a musician who influences others. With this said, how does the progression from “Out Of A Tunnels Mouth” sound like? To say that it’s pretty good is selling it short.

“Loch Lomond” is the first of many memorable songs and from the outset this growling opener hints at where the rest of the album is going. Much of this album is reminiscent of 1999’s Darktown and this song is one of the songs that attest to that. Despite Amanda Lehmann’s sweet Harmony vocal Loch Lomond is very much a balls to the wall piece, reminding me that despite its astounding beauty it can be a very dramatic place too.

“The Phoenix Flown reminds all Steve Hackett fans why they return time after time to his concerts. This song represents another great anthem superbly executed by a guitar genius flanked by some of the best musicians in the business and is followed by the mellow tranquillity of “Wanderlust” which sets a trend of introducing larger scale pieces using atmospheric tones of acoustic guitar. The scene already set, “Till These Eyes” finds Steve in a more romantic mood and exudes a man who now finds himself in a very good place. Not a bad idea to include a ballad amongst such diverse proceedings.

“Prairie Angel” is what we have all by now come to expect from Mr Hackett, blues with depth and weight. Steve makes it large with his harmonica and treating his trusty Les Paul to a severe thrashing flows into one of the highlights “A Place Called Freedom”. As Steve states himself via his website there are hints of Americana on the album and no more so than here. “A Place called Freedom” is without doubt an uplifting and optimistic song much needed in a world with so much pessimism.

In fact throughout the journey from Voyage Of The Acolyte to this bejewelled performance I found myself intrigued by the lyrical as well as musical content. None more so than “The Sunset And The Coconut Palms”. One of the first songs apart from “Blood On The Rooftops” which has made me sit and listen to the words. All credit to him. It is evident that all has been meticulously put together and as much thought gone into lyrical content as the compositions.

Moving into a more ethnic direction, “Waking To Life” has a very distinct Asian feel to it with Amanda Lehmann’s voice sounding reminiscent of Madonna’s. The climax of this song could be described as a modern day “Land Of A Thousand Autumns” which then morphs into the majesty of “Two Faces Of Cairo”. Actually written by Steve as he was sat at the foot of the sphinx “Two Faces Of Cairo” can only be described as massive. Not the first time an Egyptian theme has been explored by Steve Hackett, The forerunner being “Valley Of The Kings” equally as dramatic and equally as evocative of the culture, history and imagery of this once great empire. From such a grand musical  gesture to that of perhaps the sweetest song on the entire album, “Looking For Fantasy”. The melancholy vocal presentation of this song could well have been sung by someone like Van Morrison such is its timing and gorgeous lethargy. The orchestration and depth of this song is give further depth and reality by Richard Stuart’s subtle cello. Breezing into “Summer Breath” a lush and tranquil acoustic guitar piece bridging a trickle of a musical stream into a the mighty Tundra of “Catwalk” which is all out blues with a feeling (No approximate pun intended). I found myself holding onto the chair arms during this baby. Take it easy with the Jack Daniels it’s very easy to get sucked into the vibe!

Just when you think the last of the electricity has been used, the grand finale of this Hackett travelogue terminates with a science fiction concept in the form of “Turn This Island Earth”. Drawing to a close a very busy recording filled with musical know how, this thunderstorm of a conclusion to what is very much the produce of a seasoned and open minded team player who gets better with each passing year. “Turn This Island Earth” Yet again revisits the Darktown era with its use of low and terrifying bass notes courtesy of the cello and Roger King’s keyboard and programming skills.

My enthusiasm for this album is evident throughout my observations in this review. Aficionados won’t need such views to decide whether or not to buy this aural diamond merely a guide to compare it to previous Hackett heritage. What will appeal to many die-hard fans is the nod and a wink to salad days whilst maintaining poll position in today’s prog scene. This has been done by keeping up with technology, re-invention and belief in what he does.

Beyond The Shrouded Horizon will be available in in three formats. CD, double vinyl record with gatefold sleeve and a limited edition media-book with nine bonus tracks.  Price was unconfirmed at the time of review. Pre-orders will be taken soon via www.hackettsongs.com release date in Europe will be September 26th. My advice is to keep your eye on Steve’s site. I’ve got my heart on an LP whatever you do don’t miss out on this masterpiece.