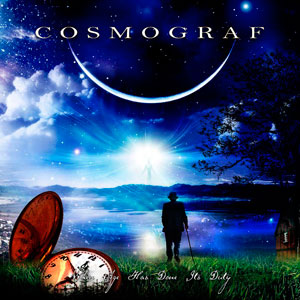 Cosmograf – When Age Has Done Its Duty

Cosmograf is to all intense and purpose Robin Armstrong a gifted multi-instrumentalist from Waterlooville near Portsmouth who sites Steven Wilson, Roger Waters and David Gilmour as some of his inspirations. This becomes evident when listening to the many effects throughout this interesting and thought provoking album which is based around the aging process and its effects on both mind and body. Some of the songs also convey Rob’s personal life experiences. For anyone like me who now find themselves more likely to be past the half way mark of their life the album does leave you pondering and even persuade personal reflection.

After the initial impressions have subsided and you stop judging events as an attempt to recreate Pink floydisms, this really is an excellent body of work. Porcupine Tree fans will hear a lot to like about this album as it does resemble some of their earlier work and Steven Wilson’s influence plainly obvious on Rob Armstrong’s style. All songs were recorded and mixed at Rob’s recording studio in Waterlooville with the exception of “White Light Awaits” which Lee Abraham mixed at his dockside studio in Southampton. All drums throughout were recorded at rob Aubrey’s infamous Aubitt Studio also located in Southampton and with the exception of one song played by It Bites drummer Bob Dalton. These West Country boys sure stick together.

Taking the CD out of the box the excellence of the booklet artwork is further extended to the disc itself. The Roman numerals of a clock face around its circumference it exudes the Hypnosis style and quality.  All credit must be given to Graeme Bell for making the superb illustrations not only great to look at but relative to the musical content of the album. Both lyrics and credits are clearly legible against the dark colours of the cosmos.

A ticking clock, a telephone ringing and a crying baby give way to muted piano and Robin Armstrong’s cynical tones as “Into this world” opens the proceedings in a fairly bleak way. It really showcased Robin’s musical competency and talent. As well as keyboards, bass and vocals he played some mean guitar making for a wonderful finale. “Blacksmith’s Hammer finds Robin in fine song inflecting folk like tints to this much lighter lilting song.  Electric and acoustic guitar complemented each other nicely. I couldn’t help thinking that Robin sounded very much like Nick Barrett of Pendragon, none more so than his reflective ramblings of “On Which We Stand”. Again, electric and acoustic guitar set against a huge church organ pad. It even had me thinking of Barclay James Harvest.

Amidst the various sound effects and memories of the seventies “Bakerlite Switch” despite its darkness reminded me of better days. Lyrics and themes of the day were included to great effect and a guitar solo from The Tangent’s axe man Luke Machin make for a special moment.

“Memory Lost” finds Hugh Lloyd Jones on vocal duties. I found this to be a rather sad song and Robin Armstrong’s guitar was literally bleeding backed by a huge keyboard orchestration. I seemed to identify with this song and its message. Bob Dalton’s drums sounded powerful and passionate, very impressive. The recital of a poem entitled “Growing Old by Tom O’Bedlam makes for a solemn beginning of “When Age Has Done Its Duty”. At 13:02 it is the longest song on the album. A master stroke was getting Steve Thorne to sing both the lead and backing vocals on this masterpiece. Many would consider this song to be morose and to be honest I think if you are of a certain age you may find it a little disturbing, however, the aging process is by its very nature disturbing. Thought provoking and interesting is how I would describe it. All credit to Rob Armstrong for putting his heart and soul into the guitar solo here.

The sound of a draft coming from somewhere actually made me shiver as the fading tones of an ECG machine signalled the beginning of “White Light Awaits”. Headlong into neo-Prog laced with electronic overtones, Robin is joined by lee Abraham playing slipknot-like guitar and bass whilst The Tangent’s Dave Ware gives it large with a slightly heavier hand than his predecessor. Concluding this powerful yet poignant opus is a more delicate piece “Dog On The Clee”. Quite haunting and what is I think a fitting finale to an album that kept me engrossed from start to finish. I would thoroughly recommend that you check out the Cosmograf website www.cosmograf.co.uk should you want to know more about this intriguing musical journey. At £9’99 including P&P it is worth every penny. There are two more albums available by Cosmograf and we will be checking both of them out. This one is definitely worth adding to your collection though.