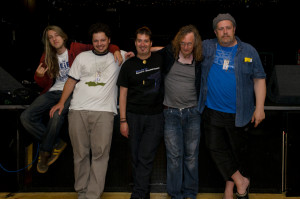 Tangent fans will have heard via Facebook et al about radical plans do dissolve the band in it’s present form. Like many if not all of you i was heartily disappointed, shocked and upset to read of this news. However, i remember having the same feelings when Pete Bardens left Camel and the same with messrs Gabriel and Hackett. I cannot offer you all any further sucker here other than to say that vital understanding should be given to Andy at this very difficult time.

On a personal note, i think that the present incarnation of The Tangent have been magnificent and their achievements speak for themselves. The band’s performance at Progmeister2 was nothing short of staggering and is something i will cherish for the rest of my life. little did all in attendance know that only a few short months that very special unit would be disbanded. How lucky we all have been to have seen The Tangent in the present guise and i am sure that you will all join me in wishing Andy, Sally and all future collaborators the very best of luck with the future of The Tangent with new ventures and adventures. Please take time to read the following statement from Andy as it is the official word on the matter and not supposition. The Progmeister’s final word on the matter, GUTTED!

Hello everyone. I’m really sorry to have to make this awful announcement but, after many months of trying not to, I am going to have to dissolve the current line-up of The Tangent. There are a number of complex and personal reasons why I have to do this, but top of the list, head and shoulders above all reasons is the continuing financial impracticality of running the band in its current state.

As a result of the current economic situation, logistical problems (250 miles between members) and other overriding commitments, this whole Summer we met once to play the Celebr8 concert, and once at a Maschine gig. We haven’t recorded or rehearsed together since July 7. Along with that are numerous other issues far too complex to recount here.

The Tangent until now have managed to exist as a 100 percent professional band since 2003. This has been my living, and I’ve had to fight to stay alive against many competitors. The huge huge number of bands coming into this arena now, along with the the public’s acceptance of piracy as the norm means that I have less and less money to finance anything like tours. I chose Progressive Rock Music as my life’s work out of love, not desire for success. The choice was guaranteed to fail, from the moment I chose this path in the late 70s. The fact that we got as far as we did is testament to a success that some folks dream of. I’m proud of our track record, what we accomplished and how we accomplished it.

We’ve seen the world, we’ve played from Moscow to RoSfest, from Spain to Sweden, from Quebec to Parma. We’ve sold records to 100 and more countries. Without electronic pestering, without vote canvassing we’ve had the opportunity to stand at the top, yet never look down on anyone. We only had disagreements with a couple of other bands in all the many gigs and festivals we’ve played. We’ve shared our “headline” dressing rooms with other bands, we’ve refused to sign contracts that call other bands “support”. We’ve stuck around to watch the whole festival rather than just appear for our slot. We’ve worked out how to do the fastest sound check on earth to make sure everyone else gets a turn. We played shorter sets when the festival was running late. We’ve seen every gig we do with another band as an evening of entertainment rather than our own showcase. A couple of times that attitude has been abused, but for the most part it’s worked.

While of course I wish to apologise to all friends and supporters of the band who will surely be disapointed by this sudden announcement just before some scheduled gigs, of all the people I wish to apologise to, it’s IO Earth. They are a true “heart and soul” investment band who work their bollocks off to do what they do. One stressful night in Leicester they managed to save the day for The Tangent and it makes me kick myself that I have to let them down on a tour that they enthusiastically promoted and worked hard for. I have spoken about this with them and in place of the full Tangent show, Guy Manning and I will do 4 special one off shows with IO Earth on all those dates. This set is well overdue. The set will feature songs from our intertwining careers which reach back over 25 years and will be rehearsed here at home making the trip at least possible if not profitable. I sincerely hope Tangent fans will still support the events and help to make this a profitable tour for IO Earth and the fantastic promoters that risk everything to keep prog alive in the UK.

People who know our songs know that “the future finds you” rather than any other way around. It’s ironic, but during this very difficult and stressful time I have been writing some of the most ambitious music in the band’s history. I hope to release Tangent album number 7 next year. Other than a few demo parts I never had the chance to get anyone from the band onto the recordings. I intend to find musicians who can help me complete this recording and I hope that with those musicians I can build the essence and workable framework of a new Tangent closer to home and thereby more practical.. The Y-Prog festival date next year is still in my diary and I fully intend to honour that commitment. Luke and Dan will of course continue the development of their excellent band Maschine and I wish them every success for the future.

At this crucial point I need to stress that all musicians involved since the inception of the UK band, (in order of appearance) Guy Manning, Jonathan Barrett, Theo Travis, Paul Burgess, Mike Gilbourne, Luke Machin, Tony Latham, Nick Rickwood & Dan Mash have provided the best moments of the Tangent’s career to date. Sally Collyer has been a true brick in organising everything. All of them have been amazing, highly skilled and enthusiastic players and to lose them in this horrible way is heartbreaking. It is with seriously twisted lip that I remember that flying Beardfish in from Sweden on Ryanair to play with The Tangent at Summers End 2008 cost less money than it costs the current Tangent line-up to meet in London.

I believe that I have earned the mandate to continue releasing music under the name The Tangent hopefully without the hurls of “tribute band” levelled at some bands who don’t have the ‘right’ player. I accept that for many people the name has now become synonymous with the people currently in the band but I beg to suggest that the music has a continuity since that first album 10 years ago. The Swedish band had to be dissolved owing to running costs and impracticalities in 2008, and it now appears that the same thing has to happen here. I’ll be rebuilding the Tangent. For now, I’ll keep you posted on developments – there are over 2 hours of music written for the Tangent name already. This is an ongoing story, as it always has been. 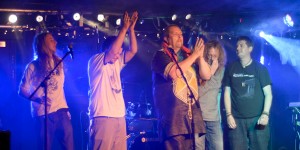