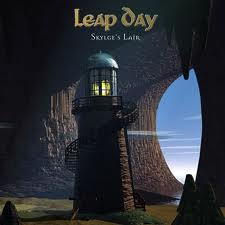 Leap day seem to be a band that we have developed a soft spot for. So when we received a copy of their new album Skylge’s Lair for review we were very keen to listen to it. Very little information was sent along side the album by way of promotional blurb etc so a cyber-interrogation was sent to Eddie Mulder Leap Day’s guitarist extraordinaire who promptly furnished us with everything we wanted to know.

It is worth mentioning before we go any further, That the informed and enlightened amongst us know that in modern term when referring to Hammonds, Moog’s, and Mellotron’s etc we are for the best part referring to the more than faithful digital reproduction of such instruments. This is a matter of convenience and a way of utilizing the sounds of such classic and now expensive semi obsolete equipment.

On receipt of this album I was struck by the packaging and artwork. It really is first class and caught my imagination immediately. The six page booklet really does its job invoking mood and feeling of the individual pieces included on the album. The images imply a story or concept to the album discounted by Eddie Mulder who assures me that all are individual compositions.

The title of the album was inspired by keyboard player Gert Van Engelenburg’s family holiday on a small island called Terschelling to the North of Holland. The Frisian name for the island is Skylge. There are many coves and small inlets invoking the idea of a lair so beautifully captured on the front cover image of the booklet.

Down to the business. Gert Evert Waalkens made a great job of overseeing the production of this album. His use of sound effects certainly loaned a feel to the proceedings. “The Messenger” catapults you from the standing start of opening sound effects straight into the main theme of the album. Not wishing to dwell on nostalgia too much I do feel that Mulder and Engelenburg have a Latimer/Bardens synergy which is apparent all the way through this album. Jos Harteveld’s vocals are always enthusiastic and manage to deliver the lyrics with a commendable clarity despite his sometimes Dutch enunciation of certain words. After a while it becomes a signature of the bands overall sound. Hey, I can’t speak a word in Dutch let alone sing an album full of songs so who am I to judge.

On “Road To Yourself” the blues button was pressed to create a musical complaint about how we men are often made to feel by our partners. There are some lovely Hammond sounds in this track and brings about a different side to the band. I must admit to selling this album short when I first listened to it and made the age old mistake of constantly comparing it to the bands previous release. However, on a more informed basis and more than one listen this album transcends the bands previous achievement.

“Home At Last” is probably my favourite track on the whole of the album. Leaning towards the Canterbury prog ism this song begins with a somehow medieval feel about it. What makes a relatively intelligent man think that in medieval times people broadcast their music to the masses using banks of electronic keyboards and electric guitars is beyond me but I do! I did the same many years ago with “Bedside manners are extra” by Greenslade. This song really did tick all the boxes for me and had I heard this track on the radio I would have bought the album on the strength of it. Gert V Engelenburg’s superb keyboard work and his ability to choose just the right voicing’s steer this band well away from the European cottage industry of Prog to another level.

“Humble Origin” begins with a peaceful acoustic guitar/Mellotron intro and steers back to the main theme. It moves too rapidly into the next song “Walls”, without doubt the most powerful and emotional excerpt to the whole journey. It was nice to hear the crisp piano patch of the now sadly under used Yamaha electric grand which brought a freshness and clarity to the piece. Leading wistfully into Jos Harteveld’s The Willow Tree” which did at times remind me of “Secret Gardner from the bands previous album “Awakening The Muse”. This nicely crafted song brought down the pace for a short while and demonstrated a lighter approach.

Title track “Skylge’s Lair” builds upon the tracks that went before it. It is testament to the whole band that they got the running order of all the tracks just right and putting this song pen ultimately was definitely the right thing to do. Had it been the concluding piece I think it may have lost its impetus. Guitars and keyboards put this instrumental piece firmly in the Camel area of prog and will blow yer socks off. The rhythm section did an excellent job on this piece and added to the flavour of the afore mentioned influence by what sounds like a fretless bass courtesy of Peter Stel and blinding drums by Koen Roozen.

The finale to this excellent album comes in the form of “Time passing By” which brings a very human element to the whole proceedings. This song seems to lend a semi-folk ethos despite residing within a technologically driven recording. There are many elements to what we call prog these days and they are all here from caravan to Jethro Tull. All in all I found the whole of Skylge’s Lair a compelling listen and one that I will keep enjoying for a while to come.

As time goes by and all of our dreams fade to dust, there should always be someone left in my opinion to carry forward the musical lantern onto the next generation. Skylge’s Lair is one of those albums which do just that and Leap day are the band to keep a fast diminishing flame burning. Hats off to them.

I wonder what it would take to get them to play at the next Progmeister festival?