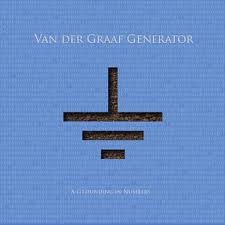 VDGG – A Ground In Numbers

Here it is, the second studio album from the three piece Van der Graaf Generator.  A thirteen track collection from a band who reformed with the intention of progressing rather than touring their greatest hits time and time again.  Anyone expecting Godbluff part two, dont read any further. The band members all approaching pensionable age have delivered a varied and interesting set which could easily knock spots off many a younger band.

The album opens with Your time starts now, a slow paced song dealing with the notion that the older you get the faster the years pass and that if you want to do something, do it now as your time is running out.

Highly Strung is a rockier song which brings Rikki Nadir straight back to mind. If the song is autobiographicall it shows Peter Hammill as a much more manic character than he would have us believe. Excellent stuff indeed.

Red Baron is a sort of ambient drum instrumental.  A strange as it sounds it is a very enjoyable link to the next track and my favourite track on the album Bunsho in which Hammill sings about how an artist can produce his finest work (in his mind) and have his public slate it as second rate while on the other side of the coin, feels his audience adored work he personally thinks is sub standard. This song features some lovely languid guitar work, and is all the more powerful for it.

Snake Oil follows in this number VdGG rally against an artists need to constantly repeat a winning formula in an effort keep their audience sweet.  This track is classic VdGG condensed into a smaller time slot.

The second instrumental of the album comes next.  Splink is indeed a strange creature. It’s probably the albums weakest link. Then again, if you like slide guitar set against haunted nursery sounding harpsichord this will definately be the one for you.

Embarrassing Kid is a bit of a wild one, but it sure grows on you. It’s a blend of artrock, powerpop and musical tourettes. It sounds like an embarrassing kid should, disjointed, awkward and maybe even willfull  but after a couple of hearings you will understand this kid and love it dearly.

A darkness falls over the next track and Medusa places the listener in a gloomy foreboding place. The lyrics are sung eerily over background which spirals then loops back on itself like a moebius strip creating a musical impression of hopelessness. Once your in her lair theres no way out. Quality.

Mr Sands is a theatrical code to warn theatre employees of a fire without frightening the audience. “Mr Sands is in the house” means that fire has broken out in the