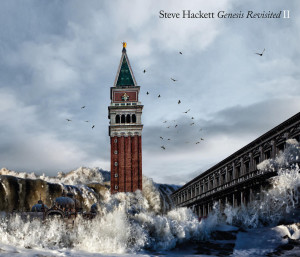 This long awaited project from Steve Hackett is finally with us. And the guessing about which pieces would be included and the debate about which should and should not be included are now at an end. Genesis Revisited II is the sequel to 1996’s original revisited album.  This offering has been a topic of debate amongst fans for a while with some people asking the simple question why? Only Mr Hackett can answer that. I would council that some Genesis songs and musical forays do benefit from a spring clean and i would suspect that the opportunity to include ideas that may have been originally intended or to simply add a different flavour or dimension  is a very hard thing to resist. I for one am glad that he didn’t, because this really is an album which not only raises a smile or two, but re-loads the enthusiasm of the by now predominantly aged Genesis disciples with the want to revisited The classic Genesis line up’s classic albums.The interesting art work is inspired by the Apcolypse section of Suppers Ready “Daragons coming out of the sea” and depending on which format you go for makes for an interesting package.

Utilising the many talents of his touring band Steve has enlisted some interesting personnel to further augment the celebration of Genesis and their finer moments. Included in the intriguing artwork and booklet is a full list of guests and their contribution. One thing is very clear from the outset, this album has painstakingly been put together and a great deal of time, patience and know how to get things just so. Testament to this is the beautiful orchestration that lures in the listener eventually morphing into the wonderful Chamber Of 32 Doors. Agents Of Mercy front man Nad Sylvan brings a little magic to the splendour of this vastly underrated Genesis classic. His Gabrielesque tones draw attention to an overlooked diamond from the Lamb album which benefits from the full and pleasing orchestration. Horizons also given a spring clean sounding crisper and slightly more atmospheric. No doubt in part down to the fact that Steve as well as playing to his usual gold standard used six string steel guitar via a Leslie. I must admit to being smitten by this and of course Horizons heralds the beginning of a very special event for all genesis fans, Supper’s Ready.

Opeth’s Mikael Arkefeldt starts to walk across the sitting room backed by some rather stunning acoustic guitar after which the vocal baton is handed to the superb son of Collins young Simon. Simon Collins contribution to the whole project is to be commended none more so than here.  Fast forwarding to Willow Farm Conrad Keely puts an almost Noal Coward upper class English feel to it. I could almost picture him in my minds eye in a smoking jacket, monocle and cigarette holder. The cigar however goes to Francis Dunnery for the gratifying closing section of  this important opus in the Genesis canon. Back to The Lamb album with Nick Kershaw delivering a pure vocal rendition and Marillion’s Steve Rotherey bolstering Mr Hackett’s already substantial guitar sound which leads to the first of the highlights of the album, Dancing With The Moonlit Knight. Steve sites his influences on this powerful and intriguing version of a personal favourite as Scottish plain music to Elgar. Opening with Greensleeves re-enforced the English nature of the piece and smoothed off beautifully by Francis Dunney’s insightful vocal signature. Jeremy Stacey’s drum sound having a great leading edge adding impetus to the main body of the piece.

Fly On A Windshield has been given new batteries adding more depth and pace to an already great piece of music leading as per the original into Broadway melody Of 1974.  Gary O’Toole’s blues inflection seemed to have an almost crooner style to it which although interesting left the song in need of more vocal vigour. This was very short lived when along came The Musical Box. This holds the earliest recording of Steve’s now famous tapping technique copied by many bettered by none. This seems a little more sinister than the original due in no small part to Nad Sylvan’s singing and what seems to be him living the part. The shear power and gusto here within had me reaching for some drum sticks. The fiddlers three section is beautifully revised with soprano sax, violin and distorted flute. a shear delight. 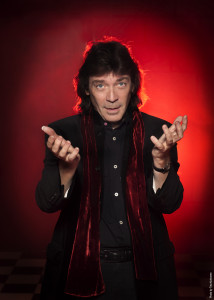 A modern musical innovator himself, Steven Wilson is given the opportunity to sing his favourite song from Foxtrot, Can-Utility And The Coastliners. Musically and lyrically written by Steve Hackett himself the song benefits from real orchestral instrumentation. I found this particularly pleasing for a couple of reasons. the first is because i am a recent Steven Wilson convert and the other is that i can hear all of the lyrics as clear as a bell. Something i couldn’t do in the original. yet another highlight in my honest opinion. Listening to these diamond tracks it unearths just how much of an influence Steve Hackett was on the sound of Genesis. Proof of this is Please Don’t Touch. Originally rehearsed by Genesis for the Wind And Wuthering album it was a variation of Unquiet Slumber For The Sleepers. Listening to his 2012 take on it here it makes me rather glad that Genesis rejected it. This is very much Steve Hackett with all of the stops pulled out. awesome stuff.

Blood On The Rooftops in it’s present form as played here has been enjoyed for a few years now by concert goers. Gary O’Toole lending his bluesy tones to it. This is another of the tracks being given the full benefit of orchestral instruments and a new nylon string acoustic intro linking seamless to the original. Such sleepy social comment is briskly awaken by Return Of The Giant Hogweed. Brother John Hackett lending some great scat flute and Flower King Roine Stolt taking the lead with his guitar literally intertwining with Steve Hackett’s legendary style. lee Pomeroy’s bass solid as granite making this a roller-coaster version of a Genesis all time great. To bring the pace down a little, Entangled is given the Revisited treatment with Jakko Jakszyck on singing duties ably backed by Amanda lehmann singing harmonies.  A song about the dream state and co written with Tony Banks this is one of my favourite songs from the Trick Of The Tale album. The tranquility of the song captured beautifully by all concerned here. Very atmospheric and thriving from rejuvenation. 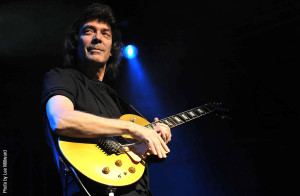 Eleventh earl Of Mar was perhaps one of the songs that i questioned with regard to it’s inclusion. Steve obviously put his heart and soul into it re-recording vocal loops and Nad Sylvan’s extra vocals do give it a little extra bite. However, it didn’t seem as gripping as some of the other songs on the album. I enjoyed the sound of the Rickenbacker 12 string at the Features are burning” point in the song.  Compensation was to be had in the following song Ripples. Oddly enough my least favourite song from Trick Of The Tale, Ripples 2012 has become nothing less than mesmerising due to Amanda lehmann’s sultry delivery. The whole piece turned into a sumptuous and captivating fairy tale. Wonderful. I have to commend Steve Hackett for including talent from different corners of the music industry though retaining a now important element of the Steve Hackett sound such as Amanda.

The three tracks culminating in the climax of Wind And wuthering are all included in sequence here Unquiet Slumber For The Sleepers, In That Quiet Earth, and of course Afterglow. There is some interesting things been done here. Firstly Unquiet Slumbers has more depth probably down to the eerie way that the synthesiser sound has been ghosted with vocal samples which adds another dimension and gains in clarity have been made with the following piece In That Quiet Earth, this is down to Steve using one guitar instead of three. gary O’Toole’s drums drive this piece along with the assistance of Rob Townsend’s manic soprano sax replacing the original  synthesiser. Afterglow sounds better for having John Wetton’s voice on it. Mr Wetton lends gravitas to this song which i always felt in it’s original form to be weak. A triumph especially with the re-recording of the Rickenbacker twelve string. 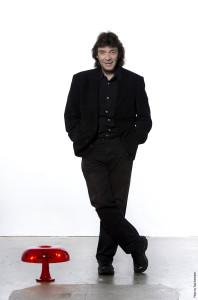 Leaving the Genesis songs behind, the last three songs on the album are from steve’s own back catalogue though have links with his former band. A Tower Struck Down written by John Hackett appeared on Steve’s first solo album and had input from Mike Rutherford. With the aid of new technology and recording technology This infamous show stopper sounds a little more aggressive, punchy and cohesive. Another worthy recipient of the revisited II treatment. Yet another song intended for Genesis was Camino Royale. Great to see Nick Magnus back to lend a hand with updating keyboard sounds on this now live standard. I much prefer this new and fresh approach to Camino Royale the middle section of which is given a different slant by Hungarian fusionists Djabe. Muted trumpet by Ferenc Kovacs and piano by Zoltan Kovac breathes new life into the piece making it much more interesting.

They say you should always leave the best till last and this applies here too. Written with Mike Rutherford part of which was rehearsed for the Foxtrot sessions shadow Of The Heiraphant in this form has recently become a live favourite with many Steve Hackett fans. Not least i would suspect due to Amanda Lehmann bringing new life to the piece and for many including myself really believe that she has injected new life into great Steve Hackett standard.There are many media options available. from Mp3 to vinyl depending on your needs and budget. I have already ordered my vinyl copy and will post my findings at a later date.

There will no doubt be cynics that will not reach out to the benefits of re-recording and resurrecting such classic Genesis pieces. I would urge the putting to one side of any such prejudice and listen with an open mind. If you allow such positivity you will be rewarded three fold. The whole Revisited II project will be toured in 2013 and frankly i can’t wait. This is the most important thing Steve has done for many years and assures his status as one of the most important musicians in Progressive music past present and future. These seventeen classic Genesis masterpieces serve to remind us of the foundations of modern progressive music. they could not have been left in more capable hands. 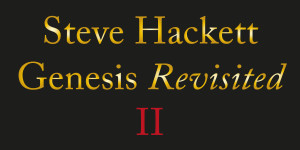 All available from www.hackettsongs.com  webstore.