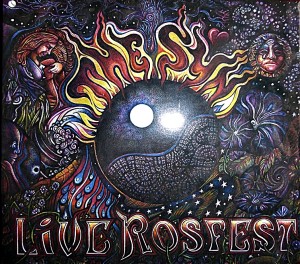 The Syn – Live at Rosfest

I received this disc some weeks ago now from The Syn’s UK distributor and have not been able to post my review until now due to technical issues with the site. This in a way did me a favour as it give me even longer to fully assess this nicely packaged album which comes with a DVD. More about that later. For those that don’t already know The Syn were loosely a precursor to Yes and is where Chris Squire played prior to forming the now legendary Prog super group. Lots about the history of The Syn and their most recent studio album Big Sky can be found on the accompanying DVD. The bands past has it’s roots in the 1960’s which can be gleaned from some of the songs here within.

The nucleus of The Syn in this particular guise is Steve Nardelli (vocals), Francis Dunnery (acoustic guitar bv’s) and the rather excellent Tom Brislin (keyboards/bv’s). Supporting them and without whom it would not have sounded as it does are Brett Kull (guitars/banjo), Paul Ramsey (drums), Erica Brilhart (keyboard sampling) and Jamie Bishop on bass. I must admit that i was a little bewildered when i first played this disc but i soon became very fond of it. The thing i like most about it is the atmosphere and the sense of being fairly raw in it’s presentation. It really is live in the true sense of the word.

Many of the songs here originate from the sixties most of which were penned by Steve Nardelli the first of which is the opener 14 Hour Technicolour Dream. Giving out a real 60’s vibe this little barnstormer really sets the mood for the evening and has some great acoustic guitar and brought slightly more up to date by Tom Brislin’s Moog sound and finished off with a fine Mellotron flourish. From the outset it is clear just how good this live recording is. With the first of Steve Nardelli’s informative introductions it was plain to hear that the band are as one with the enthusiastic crowd as Steve explained the origins of the second song Milo. Mellotron flute and strings really do take you back whilst Frank Dunnery’s guitar lends edge and substance to the piece. Paul Ramsey’s drums are beautifully captured in the mix further adding to the live feel. Written to celebrate the birth of his grandson steve Nardelli managed to write some wonderful lyrics here and though it was at first my least favourite song on the album i found it swimming around in my head and humming it which is a good sign.

The beauty of this album is that it gives the impression of a band very much in tune with each other none more so than belting out the trail blazing  Running Out Of Time. Brett Kull trading his electric guitar for a banjo blended so well with Tom Brislin’s Wurlitzer piano chops and Ramsey’s stomping drums a couldn’t stop my foot tapping. Excellent stuff. Slowing the pace a little was the tuneful New Reality which demonstrates Steve Nardelli’s solid song writing skill. Frank Dunnery’s backing vocals and acoustic guitar add atmosphere rewarded by a justified applause.

Putting out a folk and American sound Devils And Demons represents a good old fashioned well written song that could easily have been recorded by bands such as The Eagles or even Little Feat. Tom Brislin’s organ and Wurlitzer piano take this song back to the very early years of Prog making the whole thing a joy to listen to. Written in the sixties by Steve Nardelli when he was only fourteen years old, Grounded transports you there. Tom Brislin’s Farfisa organ sound puts you right in the middle of a Psychedelic  club searching for your mojo as does Mr Dunnery’s backing vocals. Austin Powers would surely dance to this, i know i wanted to.

Once again slowing the pace was a more sedate offering Madonna And Child. I love everything about this song and at this juncture of the set i had become accustomed to Steve Nardelli’s vocal style which Stefan Ingles managed to capture perfectly when mixing the album. Once again a total joy to listen to from beginning to end, simply beautiful. After such a song a moment of levity lightened the mood as Steve Nardelli explained to the American crowd the inspiration of The Syn’s biggest hit Flowermen. The introduction partly prompted by Frank Dunnery is great fun and will bring a smile to any child of the fifties and sixties.

Without a shadow of a doubt my favourite song of the set is Universal Witness. Opening like a Billy Bragg song it soon turns into a sixties beat pastiche only kept up to date once again by Tom Brislin’s Moog inflections. This song again demonstrates what a wordsmith Steve Nardelli is and had me reaching for the volume control. The intro to the following song Kings, Clowns, Cardinals may leave you in need of a lay down. Getting ones head around the speed and velocity of Frank Dunnery’s acoustic guitar playing can have you searching for the grab rail and in some peoples case breathless. Frank’s acoustic guitar playing here and throughout the whole album is inspirational. This song gives the impression of being more free form and benefits from it. However, at approximately seven and a half minutes in i thought the band were going to start singing Marillion’s Keyleigh until Brett Kull, Tom Brislin and bassist Jamie Bishop began to dual on their varios weapons of choice. seat of it’s pants playing at it’s very best.

The Reason would not be out of place on the soundtrack of a rom-com though it does seem slightly out of place here and proved to me how the word love became an unaccepted word in the Prog vocabulary and yet it should not be. A notable exception is Jon Anderson late of Yes who would often let the word creep into his lyrics. This song is a little mild compared to the rest of the set, enjoyable nevertheless. Tom Brislin’s keyboards are excellent here too.

Bringing their appearance at Rosfest to a close the band played the title song from their latest album Big Sky. I have to admit that if this is a fair representation of said album along with the others found elsewhere in this set i will be seeking out a copy forthwith. All in all this album won’t win any awards yet a think it is a little diamond. A great band captured in a time window giving their best and capturing it beautifully. The DVD included gives an insight into the history of The Syn and the making of their album Big Sky. It s a basic document yet informative and well worth the inclusion. If not only for the band interview. This album gets a whole hearted recommendation and is well worth checking out. It’s a great listen, well packaged and deserves some attention.

For more information go to www.synmusic.net