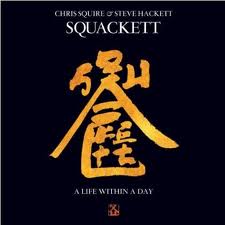 We recently received a copy of of “A Life Within A Day” for review courtesy of Vicky Powell at Esoteric Arts to whom we send our thanks. The collaboration between messrs Yes bass ace Chris Squire and Guitar legend Steve Hackett (Squackett) has recently been well documented in the press and social media so we will concentrate here on the fruits of their labour. Available in three different guises, CD, CD/DVD and vinyl record. Steering well clear of the Roger Dean fantasy landscapes and Kim Poor lithographs, the cover is a fairly sedate affair offering mainly white graphics on a black background with a rather intriguing oriental type logo. A difficult account for any graphic art given both of the main players rich musical heritage and pictoral representation. That said, this long awaited fusion of two prog godfather’s is more of a musical event rather than a display of feathers.

Stave Hackett’s musical teamster Roger King is without doubt a very integral member of the Squackett project and his signature contribution cannot go unnoticed throughout. Indeed Roger’s influence on Steve Hackett’s sound has been prevalent from his Darktown album right up until the present day. This is most noticeable on the opening title song “A Life Within A Day”. Where as on Steve Hackett’s previous albums the dark and low string sounds have been added to the mix via samples, Squackett utilize the real thing. The dramatic inky black and silky strings courtesy of Christine Townsend (violin and viola), Richard Stewart (Cello), and Dick Driver (double bass), the latter adding double bass on previous pieces. The first few times i listened to the album i must admit to being slightly underwhelmed. However, this was merely the slow burn effect. Once this fine collection of compositions were firmly embedded in my head i became smitten. The drama of the ttle track takes Squackett firmly into Led Zeppelin territory. Jeremy stacey’s thunderous drums rendering this introductory aperitif nothing short of astounding. The soic signature of Chris Sqiures bass style renind all that he is in the mix and makes his presence felt.

Mr Hackett’s now legendary nylon acoustic guitar eases the listener into “Tall Ships” where the growl of Chris squire’s bass put him firmly at the helm during this Duran Duran sounding intro, through the Simple Minds drum patterns and slide guitar to a welcome change in vocal style adding something a little special to the album before moving into the jaunty “Divided Self” with lyrical contribution by Nick Clabburn. I found this to be quaint and thoroughly enjoyed the Rickenbacker twelve string sound and the interesting termination of the song with a wonderful aural collage morphing into the wonderful “Aliens”. Chris Squire’s mesmerising vocals sounding very much like the late Eric Woolfson and as a consequence reminded me very much of The Alan parsons Project. No harm there as they too could never put a foot wrong. Lyrically not the strongest of songs though a sheer joy to listen to.

“Sea Of Smiles” with it’s John Carpenter-like intro holds many references to earlier Steve Hackett songs in the lyrics and could easily be mistaken for any of the tracks on Steve’s past five albums placing him firmly at the helm both here and “The Summer Backwards” which is steeped in a rich heritage of songs like genesis’s “For Absent Friends ” and more recently steve’s own “Serpentine Song”. The Led Zeppelin pastiche strikes again in the form of the formidable “Stormchaser”. Jeremy Stacey donning a couple of pit props to imitate the late great John Bonham during the stomp of the album. Totally beguiling.

Speaking of ghosts, Chris Squire yet again resurrects the silky sound of Eric Woolfson as he sings “Can’t Stop The Rain”. This dream of a song with some great harmony’s rendering it utterly enchanting showcases Mr Squires contribution to the album and prevents it from becoming merely another Steve Hackett album (not that would be any bad thing). “The Perfect Love Song” heralds Steve Hackett’s signature vocal style and by now familiar guitar motif, seeing out a very worthy collection of songs, riffs, tunes and anthems.

The many positive aspects of this great merger spawned many things in my humble opinion. Not least a fresh lease of life for both major parties due to their different approach and styles. It also flagged up some important indicators too. From my point of view Steve Hackett has been on a roll for some time now with the same formula. Squackett has proven that with even the slightest change in the formula great changes can alter the whole dynamic and breathe new life into an already powerful force. My findings of this excellent album are all positive with only one minor technical criticism, and that is of the druum sound. as powerful as it is portrayed it is ever so slightly recessed in the mix. this was confirmed by listening via headphones as well as all other modes of playback. This is a very minor observation and does not distract in any way from the total enjoyment of what is a great album.

As informed above, there are three different options of the Squackett album, regular CD which i primarily based by review upon and sounded very good indeed. There is a special digipak with both a regular CD and a DVD 5.1 surround sound mix which i am reliably informed is astounding. My personal favourite however is the vinyl LP which sound simply amazing. Which ever medium is chosen “A Life Within a Day” is simply a must have!!!!!!!!1

From all good retail outlets and www.hackettsongs.com