Back from the brink! 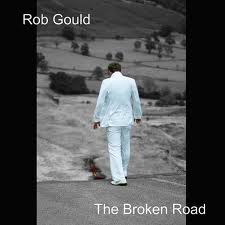 Very bizarre how things happen sometimes. I was listening to ARFM Soundscapes one rainy Sunday afternoon when on came a beautiful piece of music by and artist thus far was unknown to me, Rob Gould. Only two days later i was contacted by Rob who asked if we would review his new album “The Broken Road”. Mmm, spooky methinks. The following day a demo disc landed at Progmeister towers and played almost immediately. from the opening few bars of “Away With The Fairy’s” i knew i was going to enjoy the whole album. Having listened to it now for over a week pretty much every day can confirm that this album really is a quality item. Many comparisons could be made with regard to the opening track though it’s brevity merely serves as an intro to more intriguing songs and compositions. I became so intrigued by the album that i actually called Rob for a chat about it just to find out what inspired him.

Many of the songs are about the music industry and the trials and tribulations of being a musician and being in bands etc. Rob Goulds described this part of the album as a three phaze story. Fiona Ford’s mesmerising lyrics and vocal delivery on “The Singularity” are simply enchanting and made me think of kate Bush’s “Fifty Words for Snow”. The song contains some great percussion samples and crisp piano sounds which throughout the album are a joy. I found many of the pieces on “The Broken Road” to be restful and brought on a degree of tranquility. None more so than the improvisation co-written with guitarist Richard Taylor who loaned his folk style acoustic style to this pleasant and soothing piece. Fiona Ford makes her second appearance on the title track “The Broken Road” singing a pleading ballad set to a peaceful backdrop which includes some eerie Theremin in the mix. The title of the song refers to a path that leads Rob to his place of work in the mountains and caves of Derbyshire.

Breaking the solemnity of the album “Blip” is a quirky little tune on which is featured the Yamaha Tenorian. This jaunty tune added just enough spice before returning to the precedence already set by the previous compositions. Zeplin 111 is a piano piece inspired by an underground research facility deep inside Boulby potash mine near Whitby in Yorkshire. the research there is all to do with dark matter and the whole atmosphere of being in such an environment is beautifully captured by Rob’s deft touch with the piano. This not an album of exciting synth solo’s and massive drum patterns neither is it a chill out album. It is a finely crafted musical journey which should me savoured like a fine wine.

The beauty of the Derbyshire hills where Rob Gould works as a cave guide is sweetly represented in “The Shimmering Mountain”. Starting with Rob’s fluid piano playing giving the impression of being at the foot of the hills and as the piece builds to a climax with some great fuzz guitar gives the impression of reaching the peak. This to me is what music is all about, painting musical pictures. Rob gould’s imagination really does run wild with “Daybreak In The Graveyard Of The Sentinal Robots”. Listening to this track before i had spoken to rob really did conjure up an I Robot feel. He later explained to me that his influence was an early morning duey churchyard. However, after listening to the music and the sound of the birds and bees that rob recreated electronically it made him think more of a futuristic Robot graveyard imagining that technology has feelings. Looks like i wasn’t too wide of the mark.

The vocal melody and lyrics for “Human satellite” were arranged and sung by Lesley Davies and at first gives the impression of a west end production. Singing about her partners journey home late one night when his attention was drawn to the size of the moon when he left the road taking flight as it were and colliding with the wall of a bridge. This event continued into the following piece “The Curve”. The atmospheric tones of this piece continues the experience making an extra leap representing an out of body journey into the atmosphere linking it beautifully to the opus “Port Sunlight”. At over eleven minutes long “Port Sunlight” is the longest song on the album and is again sung by Lesley Davies. The story that began with “Human Satellite” is so wonderfully concluded with numerous nautical metaphors with the huge leap splashing down and being adrift at sea. there are some deep atmospheric soundscapes, acoustic guitar, percussion samples and a great saxaphone break by Gerard McDonald. “Adrift” serves as an ambient bridge to “land Ahoy”, a fine conclusion to a great album.

I found the whole journey laid out in this album an absolute joy. From the now familiar deep drones of the intro, to the sound of the seagulls at the end. I enjoyed the tranquility and unforced musical style and the musical competence of some great musicians. The simplicity and bite size tracks make this a very accessible album and one that i can heartily recommend. This is Rob Gould’s sixth solo album and the first time i have heard any of his music. I fully intend to sound out some of his previous work if this is anything to go by.

For more information or to buy a copy of The Broken Road go to……..

MP3 album available to download from amazon £7.49 or 89p per track.