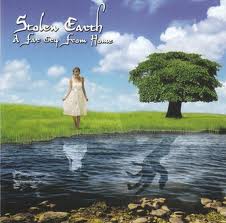 It brought it home to me recently just how important a live performance is to communicating new material. Having recently recieved a copy of Stolen Earth’s new album “A Far Cry From Home” i had only one chance to give the album a spin before catching the band live a few days later. As a result i find this particular review very refreshing to write as it is born of a complete lack of research or prior knowledge of the band. I have a vague memory of the bands management contacting us with a view to playing Progmeister2. Having witnessed their awesome stage presence i bitterly regret not extending the day and finding them a slot. I cannot endorse enough the bands performance both live and in the studio. If they are playing near you then i would suggest you make the effort to get out there and watch them.

Using my first encounter with “A Far Cry From” Home as merely a synopsis, the songs became firmly embedded following their gig. from the outset the powerful “Unnatural Disaster” see’s the band setting out their stall with an up-tempo yet soulful presentation. One thing that struck me about this song and indeed throughout the album was the solid drums courtesy of Barry Cassells and some fine bass playing by Paul Teasdale who sets out a great riff during the more atmospheric part of the song. I did find some of the synth orchestration on this song and elsewhere on the album to be a little weedy and lacking in timbre, having said that, this is merely a minor observation and is more than made up for by the overall sound of the band.

Fans of Mostly Autumn will already be aware of Heidi Widdop’s singing prowess and all round musicianship though some may be unaware that she was the first lady of said band. This becomes evident when she plays the low whistle intro to “Soul In A Jar”. This song could have easily been included on any of Mostly Autumn’s early albums and did remind me in so many ways of the heddy days of the band. What sets Stolen Earth apart is the more rounded presentation of songs like “My Lips Are Dry” which in my opinion showcases the strength of Heidi Widdop’s voice. The song is given a little more verve with some great fuzz guitar which also adds a little grit to the mix. There are some great Wurlitzer sounds here too.

A haunting piano intro and guitarist Adam Dawson’s equally haunting voice signals the beginning of “Mirror Mirror”which also has some image shifting at the beginning. the piano shifting quickly from left to right in true seventies Prog fashion. This is a great song on which adam Dawson shines. His tightly strung glassy sounding Strat contrasted by his Gilmour-like slide reaching some great heights. Along with the following song “Virgin Snow” this i feel is the high points of the album. “Virgin Snow” definately one of my favourite songs and benefits from John Sykes (keys) playing some great Hammond. Especially when it is a real one. The solid tones of the organ formed a rich platform for some memorable slide guitar playing. a song i simply couldn’t get out of my head.

If there is one song on the album that demonstrates just how well this band work as a unit it is “Tuscany Sun”. Individually each member of the band are extremely talented. As a band they are awesome. Had Pink Floyd ever elected to have a female leadsinger they may well have sounded something like this. Some great dreamy Strat and powerful vocal delivery make this song a delight to listen to. “Bitterness fades” has it all. pace, excitement, clarity and yet again some solid hammond playing by John Sykes. This really does blow the cobwebs away before moving into the more mood driven area of “Silver Skies”. The relative tranquility of the song drifts the listener into the pulsating synths of “Perfect Wave”. Yet more great Hammond and Heidi Widdop’s voice wicked up to full power this really is a fitting finale to a truly great album. Adam Dawson has the last word with some erratic slide guitar playing and chord changes very reminicent of Comfortably Numb. Sublime bass lines and faultless dumming induce the tingle factor and terminate a magnificent debut.

For anyone who enjoy the various attributes of Mostly Autumn. Karnataka, Magenta, et al, then i think they will thoroughly enjoy the soul and raw passion of Stolen Earth. Everything about this album exudes quality from the artwork and booklet to the sheer musicality of the whole album. I make no apology for not including more information about the band in my analysis. i thought it more prudent to post the review and get word out about a great album. I have been far too busy listening to the album to research the band properly. However, all of the relative information can be found at www.stolenearth.com and well worth checking out. i for one will be keeping a close eye on this band.

A Far Cry From Home is available from www.stolenearth.com and costs £10.