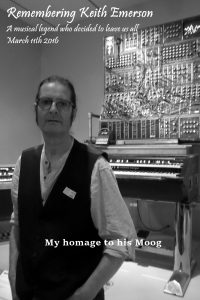 I write this missive on the fourth anniversary of Keith Emerson’s tragic suicide. An event like so many of his fans and admirers I found very hard to bear. My hero since I was thirteen years old and a huge influence on my future musical interests and obsessions. A man of extremes, hard drinking, flamboyant and an innovator, he certainly captured my imagination and adoration. Keith Emerson had talent and expertise in the extreme but it was his persona and the hunger to push the envelope and create moods through sound textures, sure there were other people using synthesizer technology by the time Emerson acquired his huge modular Moog synthesizer though only he fully exploited its use in a live setting. How many budding muso’s watched him bedecked in a fish scale jacket playing Aaron Copeland’s Hoedown at break neck speed without thinking I want to be him?

Yet with such brilliance comes a price. To set your own bar so high so earlier on in your career can be a huge burden in later life especially when health problems manifest themselves and become debilitating. The pressure must have become immense. Battling physical and mental pain in such a way had to take a huge toll and one that in recent years I have been able to understand more and more. Dealing with trauma can be so tiring and lead a human being into behaving so unlike their usual self. I know this to be so as I have been in that place, It is dark and frightening. Keith isn’t the only keys virtuoso to take his own life; Woolly Wolstenholme of Barclay James Harvest took his own life too. Woolly was a victim of depression and unique spirit, a man of steel yet so vulnerable. How many of us can relate to this? 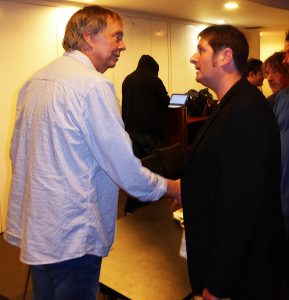 Whilst it is easy to become so Maudling about such matters it is easy to forget the legends still bringing so much joy to us who have also had demons to battle. Such people continue to inspire and worthy of our admiration. People like Andy Latimer of Camel spring to mind. A genius with a warmth and integrity, Andy along with his fans has now reached the age with underlying health problems that make them vulnerable to such things as Corona virus. I mention this because forthcoming events which I am hoping to attend may be cancelled as a result. Of course I would rather shoulder the expense and disappointment of not seeing the vanguard of Prog and know that they are safe to play again than risk their health and lose another hero. Should us remaining knights of Prog and bastions of a bygone era need to self-isolate in order to beat this plague, we can immerse ourselves in as we once did to avoid the humdrum of life a world of wonderment. A land of grey and pink, a Topographic ocean are not just pictures at an exhibition. They are the fabric of what we love and make us happy. The music with the ability to sooth and excite us. Does it belong in today’s world? I have no idea. I do know it belongs in mine and I cherish it. Prog on brothers and sisters.