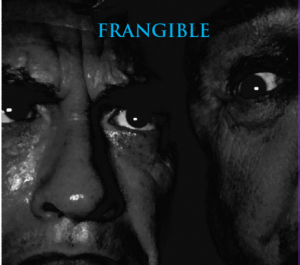 In the closing days of 2017 i was doubtful whether or not i would fit in another review as the most recent crop of releases didn’t quite inspire me. So imagine my surprise when i received a call from Paul Birchall of Combination Head fame who informed me that his new album was nearing completion and would like my opinion. I was of course thrilled as i have been enjoying Paul’s music in it’s many guises for well over ten years now and believe him to be a musical treasure and beneath far too many peoples radar.  Paul’s work with his band Combination Head is full on Prog and if you haven’t already experienced their three albums songs For A New World, Progress and Museum then i strongly recommend you check them out.  Paul Birchall’s Hammond and synth playing are in Emerson territory. In fact for a short while Paul even put an ELP tribute act together featuring ex 10CC and Camel drummer Paul Burgess and Keith Ashcroft on bass.

Paul is a seasoned muso, having played with top bands including M-People and heather Small as both keyboard player and musical director.  As a consequence of being in demand and the challenges of the music industry, it’s intensity and uncertainty Paul has written an album to reflect the effect such an industry can have on the mind, body and soul, his in particular. Described as “the tale of a journeyman musician who never wanted to be, who’s nervous system was gradually exterminated without knowing why. NOPA is an alter ego that sat on Paul’s shoulder all the way through his career and recent health challengers. The songs throughout Frangible represent the conversations had between NOPA and Paul Birchall which manifest themselves in Paul’s killer sense of humour. Witness if you will Paul’s rantings on social media with regards to all manner of things from his thoughts on a famous BBC music show to his take on various artists. Hence the cynical half of his psyche being known as NOPA (Nauseating Obnoxious Piss-taking Arsehole). 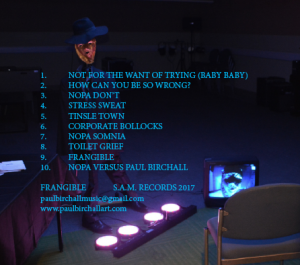 Perfect fodder for the concept album approach of Prog methinks, or at least i did before the first few bars of Not For The Want Of Trying. Leaning more towards Daft Punk than daring Emerson exploits i was hit between the eyed by what i can only describe as an electro-funk beat with lyrics being delivered via a vocoder or similar voice synthesis. Strangely however, signatures and traces of Combination Head Run through this piece and others throughout the album which i wouldn’t have thought possible. I was stunned and completely knocked off axis by the diversity of Frangible as a whole having set myself up for something completely different. Never have i found the chanting of “yeah yeah yeah” more acceptable than this smile inducing opener. Many different musical styles and influences are explored throughout the songs/pieces that make up Frangible, from electronic, pop, blues to the Slip Knot-like grunge of How Can You Be So Wrong. The one song that benefits from the vocal being shrouded by synthesis. I did find that the interaction with the CD booklet and the music became vital when interpreting the lyrics all of which are self explanatory. Worry not, there isn’t any Jon Anderson type vagary’s here and some of the songs had me laughing out loud.

Some of the bass and depth present on the first four songs will definitely win a few friends with those who like their floors and wall vibrating. Superbly mixed and produced songs like NOPA Don’t and Stress Sweat betray the skill and complexity of the keyboards and programming  which are easily overlooked when you become immersed in the musicality emanating from your speakers or cans. Easy to assume then that this is the direction the album is going until Paul throws in a curved ball in the shape of Tinsle Town. Based on Paul’s experience of playing a gig in the heat of a California desert during which he suffered a bout of exhaustion brought about by a mixture of a long haul flight, excess of too many things bad for the body, traveling for hours to the gig and then playing it. All of which left Paul with a temporary speech impediment.  with some splendid guitar courtesy of John Bailey Tinsle Town smacks of Steely Dan and without doubt my favourite song on the album. Keyboards are to Paul Birchall’s usual high standard with some great Organ and Rhodes throughout. Great pace and timing too, a proper foot tapper of a song. 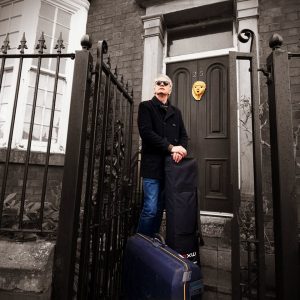 Moving into a more pop vein is Corporate Bollocks puts out an almost Right Said Fred vibe bopping along nicely as it does. The message within in strong and whilst reading along with the aid of the lyrics i found myself nodding in agreement.  No nebulous statements or fantasy soundscapes to negotiate just joyful light hearted romp.  On a darker and slightly scary side of the album is NOPA SOMNIA describes the inability of Nopa to sleep demonstrated in an electro fest with guitar supplied by Keith Ashcroft and powerful mesmerizing bass by Simon Goulding.  The pulsating bass generated throughout NOPA SOMNIA is so powerful that i was at times experiencing a bout of nausea. Listening to the same piece on headphones unearthed a wealth of detail withing the recording such as  the voices moving around the soundstage and a myriad of effects and nuances.

Singing of his frustrations about being on the road and the challengers imposed by altered bowel habits and the need to gauge journeys and appropriate facilities, the highly amusing Toilet Grief takes on a blues pastiche. Keith Ashcroft contributing some great slide guitar with Paul Birchall adding piano in equal measure. The songs and music that make up Frangible have been painted with wide strokes from a broad musical palette.  The art of being able to express in music and song the elements of your own persona and life experiences is an art for sure. The aspects of Paul Birchall’s musical career, the joys and trauma of his personal situation is for the whole world to hear. The fragility of the human psyche wonderfully represented via the different styles and lyrical humour has to be applauded. To complete the experience and complete his musical CV is the title piece Frangible. A haunting, intriguing atmospheric experience.  An expansive and textured keyboard piece beautifully orchestrated and a fitting conclusion to one of the most interesting albums i have listened to in 2017.  My initial shock and surprise on first hearing Frangible soon subsided when i realised that i couldn’t stop listening to it.

Frangible (NOPA Versus Paul Birchall)  will be available in the new year (2018) from i-tunes and CD baby. I strongly recommend you give it a listen i have a feeling you may well be smitten.