I was with the Tangent from the get go all those years ago despite in a totally inappropriate way.  I was given the bands first album The Music That Died Alone By a then friend who to my horror had downloaded it from a site called Bit Torrent. I say horror because this is when such sites were a thing of bewilderment to me and the CDR I now had of this album became a prize possession. It wasn’t until many years later in a conversation with ex IQ boards man Martin Orford I realised that what I had in my possession was abhorrent. I made it a priority to buy the real item toot sweet.  I tell you this because my journey with the Tangent brings me right up to date with the bands 12th album Songs From The Hard Shoulder. Each release from The Tangent has been an adventure differing in guile and venture. I have in recent years reviewed many of the band’s albums and found it very easy to do.

So, lets cut to the chase, shall we? Given that every Tangent album thus far I have reviewed I was hit straight between the eyes by their virtues. So, I was shocked by the fact that I wasn’t smitten with immediate effect by the latest offering from what to me has become an important musical institution of which I feel a part of. Not since I was a child of 15 when I bought my vinyl copy of The Lamb Lies Down On Broadway by Prog legends Genesis have I failed to be moved by the first listening of an album. In the case of Genesis, it was Selling England By The Pound, with The Tangent it was every album they had recorded before. This is not looking good, is it? Far from it! Songs From The Hard Shoulder had the same slow burn impacts as The Lamb Lies Down On Broadway. This isn’t an album of songs that will have you humming it’s tunes in the shower after listening to it twice, instead it will have you savour each note like a craft beer or a fine wine.

For those who have yet to dip their toes into the Tangent waters at the head of the band is Andy Tillison who writes the songs and plays keyboards like a demon. Joining Andy on Songs From The Hard Shoulder are Steve Roberts/drums, Luke Machin/guitar and vocals, Jonas Reingold/bass and the legend that is Theo Travis/sax and flute. Quite a tour de force! So here we go. From The outset the main melody of The Changes is established. What strikes me is how ell the songs have been mixed and likely to be the best I have heard on any Tangent album. Lyrically the song represents a musical travelogue of a tour that The Tangent underwent with their fellow prognaughts Karmekanik under the guise of Tangerkanik. Andy Tillson’s synthesiser throughout this piece starts in ernest (no pun intended) at six minutes into the song and to me is Andy Tillson’s best synth outings to date. The funk from both his playing and his skat vocals had by boogie genes well and truly dancing. Just after ten minutes begins a very healthy Hammond fest with Steve Robert’s drums driving the funk hard. The main theme of the song is revisted via some tasty synth playing at about 14 minutes into the song bringing it to an amazing crescendo. 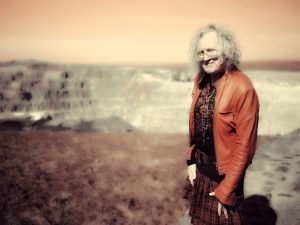 How do I start to describe GPS Vultures? The keyboard athletics alone on this piece are worth the price of the album as a whole. Having said that Luke Machin’s mega lead guitar break at just over ten minutes in are is sterling. Canterbury Prog? Without doubt. This song makes anything by Hatfield and The North seem pedestrian. Steve Robert’s drums along with Jonas Reingold’s bass are solid without. Great to hear the legend that is Theo Travis adding flute to the piece and a great seventies vibe. I really did feel the need for supplementary oxygen after listening to this piece. Steaming headlong into the next extravaganza. The Tangent have never shied away from writing songs about topical subjects that really matter. In the case of The Lady Tied To The Lamp post, it is the plight of the homeless. Borrowing themes from the distant past and with Theo Travis honing a Frank Zappa vibe with his sax the whole piece becomes a journey.  The trials and tribulations of being homeless are expressed intensely throughout the lyrical content of the song throughout the twenty minutes of its duration along with the intense musical and instrumental changes. The song reflects in particular about a lady that Andy Tillison has happened upon in Leeds. The only thing he had to offer her was a cigarette. Whilst all he could think of at the time were lyrics as he headed out of town the event obviously prayed on his mind.  From its quiet beginning every moment is note filled and musically nourishing. The whole concept of someone tying themselves to a lamp post in order to sleep in the erect position is somewhat upsetting in this day and age yet this disturbing manoeuvre was indeed was witnessed by Andy Himself who was at one time homeless himself. The message hits hard with the modified Rose Royce lyric “we abandoned her she don’t live nowhere no more”! The song plays out with Andy Tillison regaling facts about homelessness hitting hard in spoken word. In sharp contrast to this what better way to follow such a huge social message than a bit of Motown? Wasted Soul is just that. A musical tonic and without doubt the most upbeat song The Tangent have ever recorded. Celebrating freedom from lockdown and all of the constraint that went with it. In an almost Martha and the Vandella’s way only anchored to the floor by Andy’s jaunty Hammond it brings a smile to the face. In the words of the late Dr Stanley Unwin, “Deep Joy”! To conclude such an adventure The Tangent decided to include a cover song on the special edition CD. Mmmm, a cover, eh?

Well, covers can be difficult to excel with and easy to get wrong. Not so with The Tangent. In this case the UK standard In The Dead Of Night. The band nail it with only one huge shame, the fact that the late John Wetton one of the songs composers did not get the chance to hear this version of it. At sixteen minutes it doesn’t fail to please. Up until hearing this my favourite version of this song has been John Wetton’s own live rendition on his live Nomansland album. I now find myself rethinking that. Somehow the band manage to somehow give out many atmospheres throughout the song from Echo’s by Pink Floyd to Talking Heads. If all this, has you scratching your head believe me, it works! Tangent finishers will buy the album anyway but I do have to say the Songs From The Hard Shoulder like its predecessor transcends the mere need to complete a collection and stands alone by its own merits. Album art though not unlike the bands previous livery is the creation of Andy Tillison himself who cunningly provided the cityscapes in the image by morphing elements of Leeds, Chicago and New York whilst the picture of the sad girl was provided my artist Sara Mirabassi. I would suggest to anyone out there who isn’t a Tangent completist and wanting to dip your toe in the Tangent pool I would start right here. It isn’t only good, it’s addictive, upbeat, interesting and exciting. Andy Tillison and the boys are a force to be reckoned with and this album tells you just that. 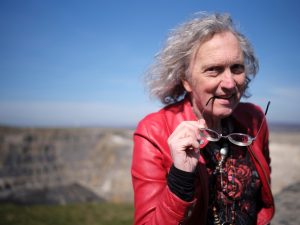 You can buy the album from the band’s website https://www.thetangent.org/

A vinyl version will be available soon.