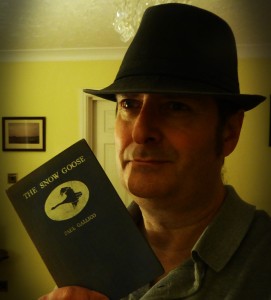 As i come to terms with being middle aged and all the things that go with it like stiff joints in the morning, not having as many teeth and having to take blood pressure tablets, i have started to reflect on the few things that have become constants in my life. I recently met up with a close friend whom i have known since i was seven years old and as we chatted i realised that we had a few things in common. We both miss mutual absent friends though we still meet up in the same pub we have frequented since our youth, The Causeway in Hartlepool. These are two of the constants and the third is music. It’s only when you start to consolidate what is important to you that you start to understand life itself. Those closest to you like partners and family, appreciating what you have and what is all around us that we take for granted, these are the important things.

This may seem obvious to some and merely the ramblings of another old git but it is something that has to be realised by yourself and not something that people may tell you. I have just read Andy Latimer’s (Camel) interview in the Classic Rock Prog magazine and whilst there was little in it that i didn’t already know i was intrigued by a comment made by Andy that made me think. One of the comments he made was “many people think that musicians are wealthy and that record companies are ripping them off”. Many musician’s are wealthy and yet some never enjoy the remuneration they so richly deserve. It depends on which way you view things. Camel’s music inspired by The Snow goose i would cite as another constant in my life and one that has been passed to another generation of my family. Imagine writing and recording an album that etches itself on someone’s soul? Imagine being responsible for themes, melodies and emotions that will stay with someone throughout their lives. The Snow goose is one such piece of music which makes Andy Latimer and the late Pete Bardens amongst wealthiest men in the world. The tale of The Snow goose isn’t something that would be easily portrayed in todays society, a young girl having a form of relationship with an old deformed man living in a windmill. In todays world the tale would be seen as promoting much more sinister happenings rather than the innocent and beautiful tale that it is. Such is the state of our world.

A disturbing event for me was when my youngest son came home with a tattoo knowing my disdain for such self mutilation (hey, everyone to their own!) and permanent display of body art. He promised me that he would stop right there and that was to be his one and only tattoo. Having grown up with Camel especially The Snow goose learning most of the guitar parts i decided to buy him a ticket and take him with me to the Harrogate gig in 2013. When we came out of the hall i could tell that he was moved by the event and just like the old man he had been touched by something he had listened to all of his life. Last year (2014) he turned up at my house having broken a promise. He had another tattoo and yes you guessed it? it was a Snow goose on his arm. He then proceeded to tell me how much it has meant to him to the point were i was almost tearful.

I have met Andy Latimer on a couple of occasions and would indeed like to meet him again just to inform him of his wealth. Along with his late cohort he has battled health problems and had to make difficult decisions throughout his life and was recently given an award for his outstanding contribution to music. I along with my son and very good friends were amongst the lucky people who witnessed the return of Camel that cold night in Harrogate with a welling of the eyes and lumps in our throats. We were children again enjoying something important. To have lots of money and the trappings it brings can never replace the constants in your life like all of the things mentioned above. I enjoy being the Progmeister which costs me very little in monetary terms and with regards to The Snow goose, well, it’s part of life itself.