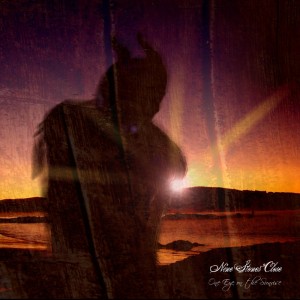 Nine Stones Close – One Eye On The Sunrise

Hot on the heels of Traces, Nine Stones Close have not let the grass grow. The bands third album One Eye On The sunrise see’s the band upping their game and finds them emerging from the their previous dark shades into semi-light. Building on his previous collaboration with Riversea duo Brendan Eyre (Keys) and Marc Atkinson (vocals) Main man and guitarist Adrian Jones included some other fine musicians to add another dimension and feel to the album. two seasoned musicians form the rhythm section of the band here, Peter Van Hoorn on drums and Peter Vink on bass lending some real clout to the proceedings. 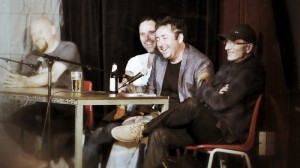 The Floydian beginnings of Faceless Angel are all too brief as i for one could have done with another few minutes of it before it subsides gently the first song A Secret. This could very easily be mistaken for a riversea song if it was not for Adrian Jones reminding all that he is at the helm. some great Mellotron sounds and the now legendary Marc Atkinson lilting tones. However

what really sets this apart from the Riversea album is the inclusion of musical tracks like Janus. Without doubt my favourite piece n the whole album. Brendan Eyre’s beautiful piano playing and vintage string synth sounds along with a great electric and acoustic guitar playing by Mr Jones. The finale of this piece immediately reminded me of Barclay James Harvest’s Mockingbird. keeping with the musical trend …and dream of sleep is a lull before the storm. Tranquility and delicacy which helps demonstrate yet another side to the band. Marc Atkinson’s silky tones aided and abetted by katy Bell’s sumptuous cello playing are ratchet up a few notches during One Eye On The Sunrise. All credit to Marc here, he pulls out all the stops making for a full blooded and powerful rock delivery. Amidst the delicate swathes of cello and acoustic guitar, this ultimately hears Adrian Jones letting rip with some great muscular guitar outings.

Eos finds the band in a more sombre mood. Peter Vinks rich,full sounding bass gives assistance to a large sound-stage and this continues into the next song The Weight with some electronic noodling and great organ playing by Brendan Eyre. I was a little alarmed at first with regard to the opening section of this song. The guitar seemed a little wayward to me. however, this will appeal to those who enjoy guitar driven Prog with more of an edge to it than the more typical and stayed traditional Prog. This theme is continued in the sleepy The Distance. Glassy sounding electric and guitar sounds hold Marc Atkinson’s voice in mid air within the mix. yet again very haunting.

The penultimate song on the album is Frozen Moment. though having moments of musical lucidity it really is for all involved a moment of being unleashed and creating musical mayhem. Employing the rather gorgeous Heidi Widdup (Stolen Earth) contributing backing vocals which i do have to say was far too far back in the mix and should have been brought forward by quite a few decibles. This track could well have been recorded for the end sequence of a super hero block buster. Brendan Eyre’s Hammond and Mellotron licks add an apocolyptic feel to the song and even has the last word. Adrian Jones wild guitar excursion is further augmented my the brilliant Matt Stevens. The sheer power of Peter Van Hoorn’s Portnoy-like Iron cobra pedal practically had my floor boards up. 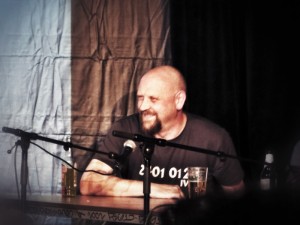 The cunning addition of Sunset to finish off the album was a master stroke. After such a tsunami as the previous song the delicate piano of Brendan Eyre and soothing cello of Katy Bell leaves anyone listening to the album in the right frame of mind and not just ringing in the ears. Nine Stones Close evolve with every album and this really is a triumph in many respects for Adrian Jones. It is also refreshing to see a departure from a current trend at the moment with regards to artwork. Many bands tend to use the same artist or style which does run the risk of representing a brand if the wrong artist is used. The artwork for One Eye On The Sunrise by Antonio Seijas continues the dark theme of Nine Stones Close and makes for a really nice package. I am hoping for a vinyl copy soon which is available to pre-order now. Release date will be 20th November. The vinyl will be a double album on 180g and will cost £19.99. i will keep you posted on my findings. As a band Nine Stones Close have hit their pace with this album and well worth exploring if you are a Riversea disciple. However, where as Riversea are a song based unit Nine Stones Close are more of a musical journey and using fully leaded fuel.

One Eye On The Sunrise is available from www.ninestonesclose.com