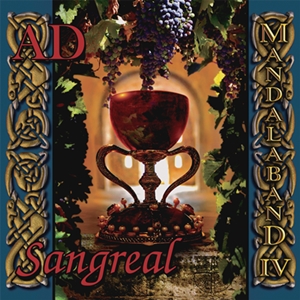 Continuing from where BC-Ancestors left off Mandalaband4 collect some new contributors along the way. Steeped in historical intrigue and moving into the story of the Holy Grail but not as the booklet denotes one that we would know, AD-Sangreal (Holy Grail)  takes the listener on another fascinating journey. On a sadder note the album features the last recording of Woolly Wolstenholme who took his own life following a severe bout of depression. A very sad loss indeed, his contribution to this album makes it all the more special.

A fairly sombre beginning to the album is “A Bloodline Lost”, Marc Atkinson delivering the lyrical narrative clearly and concisely. What seems to be a delicate sonnet soon turns into a huge soundstage of chorale and orchestration which to be honest leaves you asking the question, How the hell have they done that with the resources available? Reading the credits of which there is a track by track inclusion in the luxury CD booklet, you realise that apart from having very gifted musicians on-board, David Rohl and cohort Jose Manuel Medina share between them a wealth of technical skill and know-how and it shows throughout the whole of the production.

The scale and mood continues with “Magdalena” giving the song a very west end musical feel. The same can be said for many of the songs on the album and it would be very easy to imagine a theatrical production of both AD-Sangreal and its predecessor. This is testament to just how much imagery the delicate and powerful highs and lows of this extraordinary album invokes and plainly seen in the mind’s eye.

A fanfare heralds the arrival of “Palatium Britannicum” Hard to believe that the band themselves achieve such a huge chorale sound with only a few singers. Ashley Mulford singing the lion’s share of the words and some subtle inclusion of Celtic whistle and Uilleann pipes courtesy of the gifted Troy Donockley. Who also helps out with guitar duty on “England’s Heart and soul” where David Rohl’s rich, mellow voice relaxes you into listening avidly to every syllable he sings. A song for the patriotic methinks!

“Sancto Laurent” Finds David a little more upbeat and using lots of brass sounds to make this song stand out from all the others without losing the main theme and character of the whole for one minute. This song moves seamlessly into “Flight To Osca” which includes Ashley Mulford playing some excellent guitar licks as well as rhythm guitar too. There are some great moments on this album and this is one of them.

“Visigoths” has you reaching for a history book such is the shear want to understand what the song is all about. Another merit I think that makes the album a must have. Infact I found that there is two ways you can listen to this musical artwork, one is to just sit back and enjoy it’s splendour the other is to sit and read the sleeve notes or even further research the meaning of the various events portrayed. Ashley Mulford’s guitar again steals the show here.

“Saracens” is an all-out Arabic musical portrait and features Troy Donockley playing a myriad of instruments including a bouzouki. David’s voice beautifully augmented by the lilting backing vocals of mother and daughter Barbara and BrionyMacanas. Beware the scary voice towards the end of this song. My guess is that it is David Rohl talking through a vocoda. I was listening late at night and it frightened the life out of me.

“Al-Andalus” gives me the impression of being informative and is perhaps the least inspiring song on the album and still it’s pretty darned good. Moving headlong into “Unholy Orders” finds Ashley Mulford in fine voice as well as playing some great blues guitar. David Rohl  adding a little Hammond B3 to the mix, further adding to the blues tinge of this wickedly good outing soon moves back to the epic and grand scale of “The King Of Aragon”. A much more delicate vocal presentation by dave Durant makes for a very special moment here with some great keyboard additions by Woolly Wolstenholme.

“Holy Orders” had me thinking of enigma such was the use of Gregorian style backing vocals and even the Amen at the end. “Le Perche Val brings a massive band effort with troy Donockley’s Celtic whistle reminding me very much of Capercaillie. This spills into the next song “Anfortas Rex” which despite having less musical contributors maintains the scale and spaciousness of the other formidable pieces throughout.

Not detracting from what is an amazing album, the highlight for me was the inclusion of the Barclay James Harvest “Galadriel”. Not only was it a fitting tribute to the late woolly Wolstenholme but an amazing rendition of an already great song. The sweetness of Woolly’s voice making it even sadder about the event that would occur shortly after recording it. A further tribute is the musical dexterity shown by the other musicians playing on this piece and I do have to admit to feeling quite emotional whilst listening to it.

In conclusion, both BC-Ancestors and AD-Sangreal are to me a musical adventure. Beautifully packaged with some of Ed Utisky’s best artwork and illustrations I consider the acquisition of both albums money well spent. Elaborate notes about the albums historical content can be found in the superb sixteen page booklet. Whether you become as captivated with its historical content as I did or simply love its themes and magnificence AD-Sangreal is an album exuding quality and sewn like a silk tapestry. Mandalaband5 is presently under construction. Who knows what to expect? I for one can’t wait. 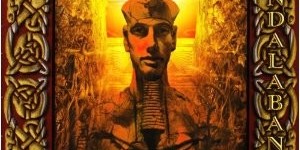