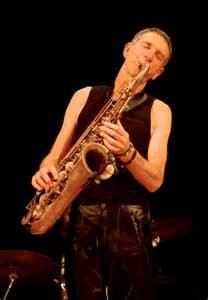 I got a message from Paul Birchall a few days ago to remind me that he would be playing a gig at Middlesbrough Town Hall Crypt with the Snake Davis band and i simply couldn’t resist the opportunity to see Snake Davis again after the last one i attended in Stokesley a few months ago. The crypt is a great place to see a band and was filled quite nicely with an appreciative crowd. As myself and good lady took to our seats we were surprised to hear Tequila being played from the rear of the hall and as the lights dimmed Snake Davis emerged with guitarist in tow making his way to the stage, a grand entrance indeed.

Pausing only to catch his breath snake and the band launched head long into Bakers Street followed by some jazz history in the form of  Harlem Nocturne. It was this kind of contrast throughout the evening that made the whole event such a joy. So much so i am hesitant to tell you too much about it in case it spoils any surprises for you should you wish to attend any of Snakes upcoming concerts happening up and down the country. safe to say there was one or two highlights in the set for me namely Steely Dan’s Deacon Blue and the opening of the second set mark Knopfler’s ubiquitous Going Home from the Local Hero OST which the people of the North eat seem to have adopted as their very own anthem. The band were on to a winner there then!

What hits any member of the audience is the calibre of the musicians in the band and not without good reason. snake’s band on this occasion are very well known to me and form the nucleus of Combination Head, one of the best and underrated Prog bands it has ever been my good fortune to come across. Paul Birchall remains to this day one of my favourite boards men as does Simon Goulding with his astounding bass playing. Gareth Moulton always manages to bring a smile to my face with his guitar playing and versatile vocals. Gareth seems to have enough energy and enthusiasm for everyone and his contribution to the evening could not be overstated. Gareth sounded like Billy Joel on a few occasions so it was only fitting that he sang just The Way You Are during the second set. new to me though was youngster Ali Thynne on drums. his style encompassed everything that Snake’s diverse set seemed to through at him and his timing was spot on.

Taking time from behind the keys Paul Birchall enthralled all with anecdotes in the form of a short stand up moment. This does not at all surprise me as Paul has a wicked sense of humour as i once found out myself having to prevent him defiling a flight case during The Progmeister festival, but that’s another story. As for Snake Davis himself, well, he is a legend. Hi playing is effortless and lifts the soul. His quitly spoken anecdotes and description of the pieces that he plays are not only fun but educational. he makes you want to explore and discover new things. In these times of political unrest, terrorism and economic hardship escapism is hard sort, but an evening with the Snake Davis band lifts the spirit. Treat yourself next time they are in a town near you.

For more information about Snake Davis and his band, gigs etc go to……..