Sean Filkins | War And Peace and Other Short Stories 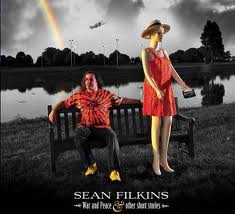 Sean Filkins – War And Peace and Other Short Stories

It’s taken me a while to get round to reviewing Sean Filkins war and peace & other short stories. I first heard excerpts from the album on ARFM’s Soundscapes and became instantly intrigued. From the outset this album holds the listeners attention and interest not only in the musical landscape painted by each ensemble the majority of which I would describe as epic.

In times of beige carpets and plain walls Mr Filkins has returned to rich tapestry and Persian rugs. By this analogy I refer to the use of every part of the soundstage utilising many talents and resources not least himself. Ably and abetted by ex- Galahad bass player Lee Abraham playing everything but the kitchen sink as well as a host of Prog dignitaries and even family members, Sean Filkins  avoids revisiting the basic prog format and going in the opposite direction too and becoming a heavy metal advocate.

Looking at the cover and elaborate booklet made me think that this really is a nice album to have in any collection. The artwork is all relevant and well presented, though, I was a bit surprised that Mr Filkins needed to display his gluteal attributes whist being stared at by a bewildered canine. As I said,  it all seems relevant.

Such is the content of this album that however lengthy this review may become it will be but a synopsis. One thing that was noticed is that this is one of those events best experienced on a good hi-fi to fully appreciate its content and grandeur.  I was very fortunate enough to have been sent track notations by Sean explaining what each track is all about and I must admit to being one up on the average punter. Still, it’s for the listener to decide for themselves and interpret as they feel.

“Are You Sitting Comfortably” is but a recording of someone enjoying a cup of tea with a biscuit accompanied by a brass band playing Jerusalem, and is indeed the first part of the following song “The English eccentric”.  “The English Eccentric” was the first of the songs that I heard from Sean and instantly fell in love with it. Leaping at you with a wasp like synth opening almost like a fanfare Sean’s voice is set within a myriad of guitar, electronic drum software and keyboards before being bolstered by the sumptuous bass of Dave Meros (Spock’s Beard).

For such a musical happening, all of the songs have a rich lyrical presence encouraging a constant revisiting of songs in order to grasp their meaning. This album really is money well spent.  Because some of the songs are so long it was found that  as much enjoyment could be had by playing songs in isolation as well as the album in it’s entirety.

Moving on to the Roger Waters type opening of “Prisoner Of Conscience” I was consumed by the depth and diversity demonstrated throughout this piece. The differences in musical styles and instrumentation make the story told by this rock operetta something rather special.  Using instruments such as Tabla, Garima, Sitar and even a didgeridoo brought about a “world music” feel to the opening segment of the song. I even found myself accepting the more grunge type guitar chops of which I don’t usually care for.  John Mitchell (Arena/It Bites) guitar playing is brisk and very much up beat although at times can become a bit Bill and Ted!

Split into two parts, part one being “The Soldier” and part two “The Ordinary man”, “Prisoner Of Conscience is about Sean’s maternal grandfather who went missing in world war two whilst out on patrol.  Should any more about the tales and stories need clarification I would suggest visiting Sean’s website www.seanfilkinsmusic.co.uk.

Sean’s daughter Abigail assists the dramatic beginnings of “Epitaph For A Mariner” by singing the traditional hymn “sailors Hymn” (for those in peril on the sea etc.) Another twenty minute job split into five parts, all the elements of which I found fascinating. The piece is all about Sean’s great grandfather William Pull who was lost at sea off the coast of Margate during a violent storm. There is a lot more besides to this tale, though again I would urge you to check out Sean’s website if you want to know more. Yet again I found myself using the word epic. The list of recruits on this song is endless, some well-known and some not as well-known like Gerald Mulligan who’s deft of touch with his drums made for some compulsive listening.

The beautiful finale of the album is an original instrumental piece from 1996 written by Geoff Webb who also plays acoustic guitar and keyboards not only here but elsewhere on the album. Originally entitled “Pastoral” Sean heard the piece whilst recording in the studio at which Geoff was employed. The slowest and sweetest of all the songs on the album it exudes optimism. I identified with this song as it is all about coming to terms with one’s past working towards a brighter future. Good to hear the reprise of the sitar and tabla drums linking the songs with the previous gems.

Bringing all to a satisfactory conclusion using Mellotron sounds, mandolin and other such Prog weaponry leaves the listener in no uncertain doubt in which genre Sean Filkins sits comfortably into. I commend him for thinking outside of the box. For utilising the talents of expert help and artistry, returning to the roots of telling great stories using music. I can forgive him for the public display of his ageing yet pert posterior but I would council against the wearing of yellow Dr Martin boots or indeed the promotion of such items.

If like we do you love prog rock then you would be ill-advised to miss out on this diamond of an album. My advice is to log on to www.seanfilkinsmusic.co.uk and order yourself a copy whist you still can.

No animals were hurt during the making of “War And Peace & other short Stories”.