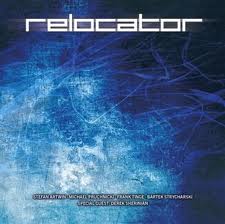 Mmmmmm! Being as i am a lover of most things prog i was inrigued to receive this album which pins it’s colours firmly to the metal prog mast. Listening to the album for the first time makes you wonder if this is what Gentle Giant would have turned into had they survived the triles and tribulations of the music industry. Be under no illusion that this album slows down much at all in the course of it’s playing time. Very much a buckle up and enjoy the ride type of album. I was instantly reminded of Dream Theatre when i first listened to the album. Not surprising then that ex Dream Theatre keys man Derek Sherinian is providing the textured landscapes for the other musicians on the album, albeit in a special guest capacity. Hailing from Germany this is the bands first album and frequently exceeds the boundaries of what we have come to know as prog. Relocator bare little or no resemblance to other bands skirting around this genre. As well as the afore mentioned Mr Sherinian the line up consists of Stefan Artwin (Guitars & programming), Michael Pruchniki (Bass), Frank Tinge (Drims & Percussion) and Bartek Strycharski (Electric Violin).

No doubt about it these guys rock. From the opening few bars of “Red Vibes” the race is on. Huge power chords and a beat to rival any heavy metal band it propells along in a very dramatic fashion. Though Stefan Artwin’s guitar is the main instrument here it is carried along beautifully by Sherinian’s nightmare orchestration. “Biosphere” is a keyboard lead assault which from time to time slips into the East coast sound and becomes very ecclectic drawing in many styles. It does include some extremely good interplay and gives your hi-fi a thorough workout. The title track “Relocator” is in my opinion the best track on the album and despite the heavy guitar presence it showcases Michael Pruchniki’s sublime bass playing whilst giving a little more air to the talent of Frank Tinge who’s drum technique shone through throughout the whole piece.

The next piece entitled “Proxima” maintains the pace of things quite nicely and could very easily lend itself to film score. This track opens with some sinister sounding keyboard voicing which reminded me of an early Alan Parsons piece. Not for long though, as things swiftly move up a gear and regains the high octane speed and performance. Indeed this is an album meant to be played in a performance car whilst driving at break neck spead through the desert.  “Aavishkar” is perhaps one of the most interesting tracks on the album and invokes a very Arabian feel about it as it begins. There are some wonderful textures on this piece and i think as with some of the other tracks the subtle use of Bartok Strycharski’s electric violin sound sets the whole album apart from being simply “Prog Metal”. As a package it is very difficult to catagorise. I think lovers of both traditional progressive music and those preferring a little more of an edge to their music will get something out of this album. The electric violin leads the way into the next supercharged foray “13 Reasons” and makes for some intersesting and and differing textures throughout. The remaining tracks “Urban Blue” and “The Alchemist” keep the pedal to the metal all the way through to the albums conclusion.

Beautifully packaged with some striking artwork, i would recommend this album to those who like their prog with a bit of zest. I think this album may drawer music lovers of two camps from differing directions. Those looking for something a little different and those who simply enjoy a raunchier aspect. Either way Relocator is a worthy addition to your collection and fails to disappoint. Devoid of any lyrical content this is very much an album for music lovers. Sound them out and don’t be surprised if you find yourself reaching for your credid card.