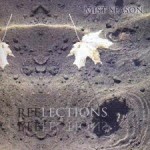 Some of you may recall an album that we reviewed some time back by The Samurai Of Prog? Instigator of the project was Kimmo Porsti, drummer and multi instrumentalist. I was very impressed with the quality of all who played on that album not least Kimmo himself. However, it was an album that was mainly covers. I was pleasantly Surprised then when a few weeks ago a package of CD’s arrived at Progmeister towers courtesy of Kimo himself. I was surprised to read in the accompanying litrature that the albums were more Jazz than Prog and Kimo hinted that i may still be interested in reviweing the album despite this. Of the discs that Kimmo sent me it was Reflections by Mist Season that really took my fancy.

Removing the disc from it’s rather un-inspiring packaging i was instantly hooked by this album. Yes, it is jazz in no uncertain terms, however, it has Prog trickeling through it in a very pleasant way. Many of the enchanting tracks on the album of which there is fourteen. The Prog influence to which i refer is that of early Camel and Caravan. Lovers of dense layers of guitars keyboards and drums may be a little disappointed. Reflections is an album of great musician’s playing inventive and highly listenable, quality compositions. I was reminded very much of Fourplay and many west coast jazz muso’s like Bill Evens, Stanley Clarke et al. The opening gentile, slightly muted piano stroking of echoing Lights soon subsides as if replaced by the driving “Manaos”. Kimmo’s drums are vibrant, alive and exciting. Kimo Kajamies keyboards are solid throughout the whole album though his Hammond and synth breaks really get you in the mood for listening to the rest of the album. 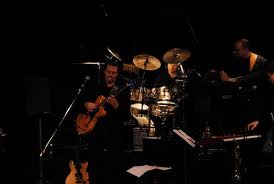 “Defending Lands” features Mirja Lassila singing one this lilting and enchanting song. Risto Salmi’s Tenor sax and recorder add a great Prog feel to the album and Tommi Varjola’s guitar finish things of very nicely.  Their rich contribution is continued throughout the next piece “Pan”. “Pan” really is an all out jazz fusion foray and without doubt the most memorable song on the album. “Lobsterland Groove” is credited to Roine Stolt of the Flower Kings fame. This moves the band into capercaillie terratory. very pleasing indeed. Kimmo Porsti shines on both drums and percussion here with some great synth scat by Timo Kajamies. The inclusion of an accordion gives a seaside feel about it. A reprise of “Echoing lights” solo grand piano flows with tranquility into “Matilda’s Song”. Mirja Lassila’s sumptuous voice lends an eerie calm to the proceedings. this teally did remind me very much of camel’s The snow Goose with it’s lilting vocal and haunting Rhodes. it really does have the tingle factor.

moving on a little to “Puppet On A Chain” no doubt named after my favourite Alistair McLaine film unearthed a diamond of a track. The band just couldn’t put a foot wrong. Timo Kajamies synth singing in true Prog tradition and contrasted in Yes tradition being followed by the Steve Howe-like “Summer Season”. A welcome interlude of solo acoustic guitar. The remaining two cuts on the album are music recorded for soundtracks.  the first being “Chaser” from the movie ll Corpo. very much in the Camel Breathless era, the band really getting down to some great funky sounds with sax, clavinet and Rhodes. This really did make me smile. Staying with the same theme “Sally & Jack” from the ost of Blow Out, the beautiful acoustic guitar and alto sax make a fitting conclusion to a very satisfying album.

This really is a great way to take progressive music. The band are proud of the fact that no rhythm machines or programming are used, instead gold old fashioned getting down to it and playing with synergy. If this is what music is like in Finland i may just make it a holiday destination. I have to disagree with Kimo Porsti with regard to this albums label. Despite it’s obvious jazz leanings, “Reflections” as an album is very much Prog in the nicest possible way. I have no hesitation in recommending this album to anyone out there who like me adored the jazzier prog bands like Camel, Caravan, Quantum Jump or the Canterbury scene in general. Mist Season and the many components there of are a force to be reckoned with.

For more information go to………….