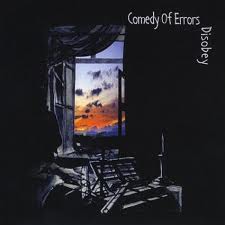 Beguiling, bewildering and really very good is the way that I would describe “Disobey” the shape-shifter of an album by Glaswegian based Comedy Of Errors. Vocalist Joe Cairney brought the release of “Disobey to our attention a few weeks ago and promptly sent us a copy for review.

The presentation of the CD and it’s packaging is very impressive complete with a booklet containing legible lyrics and credits and intriguing art work. The immediate strengths musically on this album are keyboards and guitar both of which are excellent. Whilst Joe Cairney does an sterling job of singing the at times somewhat contrived lyrics attention is drawn to the musicality of the compositions.

The album was mastered down in Southampton at Rob Aubry’s Aubitt Studio and it is plain to see and hear that attention to detail has been paid to all aspects of the production. The opening effects laden title track “Disobey” fools the listener into thinking very early Marillion whilst in fact throughout the whole of the album it becomes very hard to define any one particular influence, though I would imagine it to be the usual suspects.

A reverse tape effect backed with a rather nice Mellotron string sound launches “Disobey” into an aggressive and heavy style which sets out a distinct feel of the album. Ebbing into a tranquil conclusion keyboard swirls and electronica moves into “Jekyll”. What sounds like a full blown Genesis pastiche soon picks up speed with a dirty Hammond sound. It’s all here for the ardent prog head. Jim Johnston’s keys really shine on this epic and also Songs like “Carousel”.

Listening to what has now been a pure prog extravaganza It came as a bit of a shock when someone pressed the ZZ Top button and American Rodeo ripped into my living room. Mark Spalding’s guitar playing took on a different style all together. Meanwhile back on Earth the following song “It Could Have Been Yesterday” lowered the listener into a false sense of safety. At first it could be thought that this is the kind of song that The Corrs would record. That is until Mark Spalding reappears with a meaty guitar brake in the middle reminding all that you are listening to a serious musical force.

“Joke” finds the same guitar infusion amidst a slower pace which also lays bare Joe Cairney’s Scottish vibe apparent throughout a lot of his delivery. Though it is not exactly The Proclaimers go Prog, it is a very welcome honesty in the way that the songs have not been falsely Americanized.

“The Student Prince” brings the band firmly back into traditional prog as apposed to the much over used category and phenomenon of Neo prog. Split into four parts beginning with “When Will I See You Again” and ending with the superb “Green Light Coda” “The Student Prince contains some great moments not short of pep and vigour from all members of the band.

Throughout the album I must admit to becoming a little confused as to what the band were all about. Classic rock, Prog, Metal, AOR??? What ever they are I like them for it and heartily recommend this album which tends to creep into your head by stealth demanding that you keep revisiting it.