The Tangent | The Slow Rust Of Forgotten Machinery. 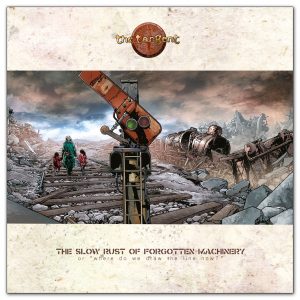 Never one to sit on his hands even following a heart attack and all that goes with it Andy Tillison the creative mind and engine of The Tangent set about writing a brace of songs and musical pieces that reflect just what’s on his mind lately. World affairs especially the plight of the migrant crisis and the part our government had on it’s cause to the frightening loss of wildlife thanks to man’s interference in their habitat and plundering of their carcasses for financial gain. Andy has brought together some ace musicians for The Slow Rust Of Forgotten Machinery though none of them strangers to The Tangent camp making up as they do welcome bedfellows from Karmakanic there is bassist extraordinary Jonas Reingold and Marie Eve De Gaultier playing keys and backing vocals whilst Mashine’s Luke Machine takes up his guitar as well as Chumbawamba’s Boff Whalley and an as yet unknown DJ Matt Farrow add some interesting flavours to the mix. Seasoned Tangenteer Theo Travis is also present adding his wizardry with flute, sax and all things blown. A supergoup in the old fashioned sense of the word.

The fist song Two Rope Swings is a song contributed to the Harmony For Elephants project with the plight of said species in mind. Andy Tillison’s voice and piano from the outset setting the narrative for such a frustrating issue yet setting the musical pace for the rest of the album. Luke Machin’s guitar and Tillison’s Hammond playing here are sublime and made me feel a witness to Luke Machin’s coming of age as a guitar player. Adding a little sweetness to what can become a slightly aggressive mode of message delivery is Marie-Eve-De Gaultier’s backing vocals so too does Leo Travis’s flute. Perhaps the most gentle of the suite of movements here Two Rope Swings projects the subject matter rather well and a worthy opening gambit for such a musical journal of world affairs. As thought provoking as any documentary or plea methinks. The ivory trade mooted at beautifully simply by Mr Tillison quoting that even the keys he learned to play his preferred instrument on.

Speaking of instruments this is the first time that Andy has played the drums on a Tangent album all be it an electronic one he still had to hit it with sticks and very well he did too. Dr Livingsone (I Presume) heralds a lengthy musical prelude filled to the gunnel’s with wonderful playing from all quarters. Tillison’s Hammond (a proper one) and synthesiser is framed nicely by Leo Travis’s flute and clarinet and underpinned by Jonas Reinhold’s solid as a rock bass. Luke Machin adds a few Jeff Beck licks to the proceedings all making for what i considered to be a musical work out. No lyrical or vocal depictions here to mar the flow of impressive musical expertise, just sheer unsullied musical splendour.

What i would presume to be the title track Slow Rust really is a piece that commands the attention of the listener. Not for the firt time on a Tangent album i found myself being reminded of Rupert Hine of Quantum Jump fame (another talented individual) in his vocal delivery and haunting harmonies with Marie-Eve De Gaultier. With the heart breaking subject of the migrant crisis and those making their way from war torn and ravaged countries to safer shores Slow Rust pushes the Prog envelope in much the same way as Roger Waters does focusing on the world around us and the state of the world rather than historic events or fantasy as in days of yore. I recently gave the title of “the Billy Bragg” of Prog in a recent interview and a title he was more than happy to have.

A particular favourite piece of mine is The Sad Tale Of Lead And Astatine. No doubt a song about toxic waste and the environment though i was distracted from the protestation of such a topic by the sheer musicality aided and abetted by a strong jazz/fusion vibe. This was always going to win a friend in me and something that Andy Tillison infuses his solo albums with. With a steely Dan smoothness Andy Tillison’s piano playing and Jonas Reinhold’s double bass make for a sophisticated delivery. Think Chick Corea and Spyro Gyra and you won’t be far away, wonderful stuff. Andy even played a drum solo here which i found quite impressive. Too many people see andy as a keyboard player when in fact he is a multi instrumentalist. 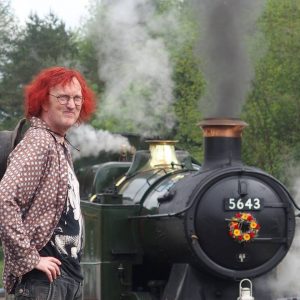 In the current sate of releases by artiste’s such as Roger Waters, Steve Hackett and Guy Manning’s latest project Damanek their is a growing trend to pen songs and operettas regaling stories of the disenfranchised though it has to be said that the mother of all these songs is here in the form of A Step Down The Wrong Road. This is without doubt the albums epic. The Panorama of Prog shall we say? With a powerful narrative examining our and other governments ills and indeed ourselves as a nation both at home and abroad all musical route of administration are present here from Punk to Funk. Leo Travis adding some sax to the mix and Luke Machin adding some powerful licks like another left hander i can think of make this the edgiest Tangent song to date. Even Gustav Holst is celebrated with a quick blast of “I Vow To Thee My Country” amidst the dense layers of anxst, frustration and protest. A nod and a wink to the late Keith Emerson who included the same passage on his last album or a bout of patriotism? Who knows? A powerful raucous message placing Mr Waters in a Mogadon  haze by comparison.

Swathed in a exquisitely presented package with artwork by Mark Buckingham who worked for a while with Marvel/ DC comics  The Slow Rust Of forgotten Machinery is given a smart new outfit of clothes depicting a tapestry of the music within. Not frightened in any way to experiment and bring new things to the party on the final piece Basildonxit The Tangent solicited the assistance of DJ Matt Farrow to give this song a dance vibe. To my mind it added more colours to an already rich palette making The Slow Rust Of Forgotten Machinery an exciting and  gratifying musical ride. Don’t get me wrong, other albums within the category that The Tangent find themselves encased in are wonderful conveying as they do better times that will never return. What the Tangent have done here is to use stories of more recent events and different musical styles which takes the noble art of Prog off autopilot allowing free rein for both the listener and the artist spread their wings within their peer group. What the Tangent have done is fitted a three litre engine into a Morris Traveller and removed the brakes making for a roller coaster of a ride. Keep your hands inside the ride at all times and scream if you want to go faster.

The Slow Rust Of Forgotten Machinery is available from Insideout and released July 21st.

A special pre-order CD package is also available from the Tangent website for £19.99. This version will be signed and all proceeds going to the band to fund further projects. The preferred option in my opinion.