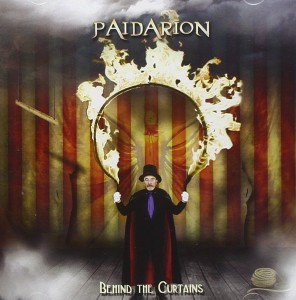 A few days after we posted our review of the Samurai Of Prog album Undercover, we received an email from drummer/multi-instrumentalist Kimmo Porsti who played extensively on the SOP project. He informed us of another project he is involved in called Paidarion. A few days later we received a delivery from Finland of the newly released Paidarion album “Behind The Curtains”. Evident from the outset by merely observing the artwork through the shrink wrap that time money and effort has been spent on the presentation alone. Tearing off the wrapping and flicking through the booklet really is inspiration enough to get the disc into the player and discover if it does what it says on the tin.

Well, it does! Elaborate notes throughout the booklet inform of band members and history, credits and of course the all-important synopsis behind the concept. A concept I must confess to not fully understanding even after reading it on more than a few occasions. Although “Behind The Curtains” is very much a prog album it in many ways defies categorisation. The nearest I can think of is prog with a jazz edge. With the exception of Elina Hautakoski’s silky smooth vocal contributions this album may well appeal to all those who miss new output by Camel.

Everything points the way to life in the circus and of one particular individual within the organisation. The songs seem to reflect this throughout the whole of the CD starting with the title song “Behind The Curtain” (song For Michael). Dark keyboard drones give way to the bass virtuosity of Jan-Olof-Strandberg who not only plays 4,5 and 6 string bass guitars throughout the album  composed this great opener which in my opinion wouldn’t be out of place in a movie soundtrack. Smooth, lilting, and beautifully put together “Behind The Curtain” sets the standard for the rest of the compositions.

“A Small Wish” has to be one of the many highlights of the album blending hectic prog time changes with Syro Gyra type horns courtesy of Risto Salmi with his tenor and soprano sax licks. This continues into “Trapeze” where upon things take on an almost George Benton feel. Not for too long though, Jaan Jaahans Andy latimer-like guitar break the pace for a short interlude whilst keyboards and sax really hammer home a powerful climax before the album takes a Tarrantino twist to the proceedings. “A Springtime Meadow” and “A Vertical Rope” allow Elina Hautakoski to display her jazz diva vocal talents. Whilst at first it may seem too much of a departure from the rest of the album these songs really do work, and the contrasting effect prevents the album from being an all-out, in your face barrage of intense prog thereby making the whole event appeal to a wider audience.

Listening to the album over a protracted period it becomes evident that all musicians involved are playing for the sheer joy of it and the quality unearthed in every song is there in spades. The keyboard skills of Kimmo Tapanainen are highlighted on “Leap Into The Unknown” featuring a proper church organ and flows seamlessly into “A Rose In The Sun” whereupon once again many comparisons to prog legends camel can be made. Elina Hautakoski singing of the song “Paidarion” Whets the appetite for exploring the storyline behind the album such is the clarity of her delivery and Risto Salmi’s sax exploits hark back to the early Dire Dtraits days, compelling stuff.

The penultimate piece on the album “The Magician’s Departure” finds the band in a more blues frame of mind and I did find myself struggling with some of the obviously intentional discords and jazz club style drunken vocals, however, even in such mode it can be heard just how adept the band are at melting different genres into their music. This can plainly be heard on the final piece “The Final Show”. Here a consolidation of all that has gone takes place with the reprise of earlier themes in true prog tradition and American west coast influences such as the afore mentioned Spyro Gyra, Yellojackets et al. Samurai/Resistor cohort Steve Unruh adds yet another dimension to the finale with his violin. Rousing stuff!

I found reviewing this album both a total joy and a total surprise mainly because I knew very little or nothing about the band, their history or indeed the project itself. Kimmo Porsti has brought together quite a dream team himself being a master of the drums and doing so inspires further exploration of their previous album “Hauras Silta” and eager anticipation of further projects. Production is A1 sounding at its best on good quality playback equipment. Well, a grand way to end 2011 methinks. Paidarion just sneaked in before I assembled my list of top alums of the year and receives The Progmeister’s strongest recommendation.

Behind The Curtain can be purchased from www.seacrestoy.com and costs 10 Euro including  postage.