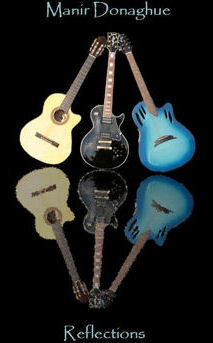 Every now and again fate plays a hand in a new discovery.  Whilst recently embroiled in another matter, Manir Donaghue and I discussed the virtues of many other musicians before he modestly mentioned his own work.  Manir has kindly agreed to help me organize an event next year which you can find out more about elsewhere.  A week or so after our meeting, I received a copy of Manir’s album reflections.

For the first week it was in my possession I played it relentlessly in the car travelling to and from work.  At that stage I knew that it was one of the most relaxing and easy to listen to albums that I had played for some time.  It wasn’t until I had the opportunity to listen to it properly via my aging yet sonically pleasing hi-fi just how good it was.

Manir is a musician who creates mood and pastoral views with his music which I can only describe as beautiful.  Don’t get me wrong, this is not an album to nod off to.  There are some very strong pieces on the disc which does have a tendency to transport the listener back in time to better days.

From the lilting chime-like guitars of the opening “Yule” to the unashamed electronica of the concluding “Sometimes My Head Feels like This” it is evident that Reflections is an item of quality over which a large degree of care and attention ahs been taken. Witness the church or monastery atmosphere at the beginning of “Frozen” and the way it changes character as if to herald the home coming crusaders.

“Winter Gone Spring” highlights the wonderful production of all the pieces performed on the album and is a credit to both Manir and the very talented Tony Patterson, who also lends a hand with flute and keyboards.  The contrast of electric and acoustic guitars, their voicing’s and tones are well thought out and executed. An alternative version of this piece is included later on the album. 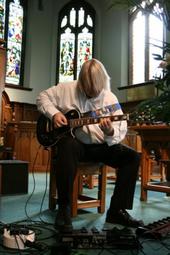 “Mayfly Over Pendle Water (Part One)” Reminded me very much of the early days of children’s television, Trumpton, Chigley, and Camberwick Green et al.  I was mesmerized by this and the ensuing part two of the piece.  The golden days of Hackett sprung to mind.  “lazy Summer” too had a good vibe about it.  Sumptuous, crisp guitars haunting flute.

“Flame” is without doubt my favourite track on the album.  It reminded me just why I love and enjoy this genre of music.  I find this piece gentle, soothing and very easy on the ear.  The following piece “September follows in a similar vane portraying the pastoral feel which is what I enjoy most about the whole album.

“Angelus” finds Manir yet again in full blown Hackett mode and steers the album in said fashion towards its more avent gard closure.  I am reliably informed that the closing minims are made by playing two acoustic guitars through a chorus device and with some nifty noodlings end up sounding like a Tangerine Dream pastiche.

I was pleasantly surprised by this album.  Whilst I enjoyed it very much as background music in the car and in the home whilst entertaining guest, I didn’t fully appreciate its depth and breadth of sounds stage until I listened to it properly in isolation via more elaborate media.  This I think is down to attention to detail and extremely good production.

Anyone who enjoys the music of Anthony Phillips early work or Willoglass should sound out Manir Donaghue.   His music has an essence that has since been lost over the years since such things really mattered.  I for one will be keeping a close eye out for further releases.
www.manirdonaghue.co.uk