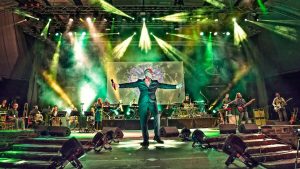 Big Big Train have announced a UK tour for 2019.

The band will play six dates, kicking off at the Queen’s Hall in Edinburgh on October 26 and bring the run to a close with a performance at London’s Hackney Empire on November 2.

Big Big Train will play songs from throughout their back catalogue, and will also play material from their as-yet-untitled studio album. And, with 2019 marking the 10th anniversary of The Underfall Yard, fans can expect some tracks from the record, too.

Sweet Billy Pilgrim will provide support, while Big Big Train will be joined onstage by a five-piece brass ensemble.

Vocalist David Longdon says: “The band is thrilled to announce that we will be performing six concerts throughout Scotland, England and Wales during 2019.

“A UK tour is something that we have wanted to do for some time and we are greatly looking forward to getting out and playing our music for our fans.”

Tickets for the tour will go on general sale from 11am on Friday (November 9). Find a list of dates below.

Earlier this year, Big Big Train release the live album Merchants Of Light, which was recorded at London’s Cadogan Hall in October 2017.