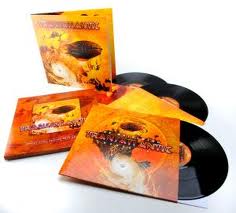 To many Transatlantic followers a review of this album is old news.  It comes as no surprise to them all just what a feat of brilliance The Whirlwind is.  However, the virtues of Transatlantic somehow passed me by and it wasn’t until I witnessed the force and energy of their performance at the recent High Voltage festival that I became smitten.

Before placing the black silk upon the head of the judge and passing sentence on me, allow me to explain.  Most TA fans  have been enjoying The Whirlwind for over a year now (gawd knows how it slipped through my net) and like them I was awestricken when I eventually got to hear it by it’s majesty and production.

The crux of this review is not to repeat what has already been written about this opera presented to you by four of progs premier league players.  It is to inform the faithful that you may have not yet heard it at its best.  I have just taken delivery of the special vinyl edition complete with a bonus LP.

It just sounds so right.  As good as the CD version is it lacks the organic traits and sonic presentation evident on this wonderful keepsake.  Gone are the sometimes off-putting frequency extremes which in some cases prevent you from hearing a lot of the recording. Instead the whole soundstage is much more linear allowing each individual musicians contribution to be heard properly just like a well mixed gig. Or broadcast if you like.

This reaffirms to me that as a genre prog rock is best listened to and appreciated on a good old vinyl record.  The bonus LP is a dream containing four new compositions penned by each member of the band. These are to be found on side one and comprise of Spinning, Lenny Johnson, For Such A Time and Lending A Hand. All of which are wonderful.  Spinning in particular may well be a homage to YES.

On side two there is a treat in store for lovers of nostalgia starting with the very early Genesis song Return Of The Giant Hogweed. Very faithful to the original and nicely brought up to date. Many people shy away from covering such things preferring instead to listen to the originals and until I attended a Re-Genesis gig thought along the same lines.  However, some things in life are worth revisiting and sometimes updating.

I am always of the opinion that artwork such as that on display here is best appreciated the bigger it is and as a package its money well spent.  As you can see in the above picture both albums are housed in beautifully presented sleeves which fit tidily into an outer slipcase.  Presentation is of the best I have seen.

Should you be fortunate enough to own a turntable I would recommend you obtain a copy of this necessity whilst there are stocks still available?  Even if you already own a copy of the CD I would recommend you acquire a copy.  I am reliably informed that only a thousand have been pressed worldwide and three hundred special orange ones for which you will pay a premium.  The Whirlwind as a concept like most prog ventures is open to interpretation, though from what i can gather it is about the turbulance of life and all within.  It also contains a spiritual message as would be expected from Neal Morse. Not a point that is laboured i have to say and via’s away from the songs of praise feel that you can sometimes get with Morse music. There are some magic moments though and well worth the outlay. Trust me; it’s an evening’s entertainment in a box.

Big thanks to Craig Marney at EMP online for expediting a copy of The Whirlwind, his valuable help and support, patience and kind words.

In arguably the biggest surprise of 2009, Transatlantic announced that they were re-forming earlier this year and have re-united after a 7 year sabbatical from their last release, ‘Bridge Across Forever’, to record also arguably the finest prog release of the year; a CD consisting of one epic 78 minute track of a segue of songs. (Is it one song divided into segments, or a segue of songs? – I expect the arguments will carry on a long time on this subject matter, but I firmly favour the latter argument.) After all, if Porcupine Tree can do it, why can’t Transatlantic? The truth is that this one puts PT’s partly disappointing effort into the shade and far surpasses it in virtually all respects, not just length. After a few listens I concluded that this album is, I would say, even superior to their own previous two efforts (and they were both fantastic albums anyway) and it certainly is more grandiose in scale.

Neal Morse is still the main songwriter and seems to be still the main protagonist of the band, but this time it feels like more of a group effort, in particular Roine Stolt’s guitar playing is given more prominence than before and has never sounded better than here.

Before reviewing in more detail, there are some small negatives aspects re this new recording. In particular, and perhaps inevitably in a complex segue of sophisticated songs, some of the transitions between the segments seem to work better than others, some even sounding forced just to carry on  the continuity of the music.

1a) (As in any self respecting prog epic) The Whirlwind announces itself with an Overture that after a slow build up introduces various motifs that will appear again later in the CD. A slow start with sound effects (Is that a hint of Pink Floyd’s ‘Breathe’ we can hear?) and then horns and strings lead to the ‘The Whirlwind Theme’ and then some bright interplay with several changes of tempo between all the instruments, excellently driven by Portnoy who’s percussions are, as always, superb throughout the whole recording. Eventually, there’s a reprise of the theme and the first vocals come in with…..

1b) Whirlwind. Surprisingly it is Roine who leads into the verses, while Neal sings the choruses. The Whirlwind is not an epic but is a good song with a very catchy chorus and which (slowing) leads effectively into…

2) The Wind Blew Them All Away. A slower song but also one of the most powerful on the CD. Some great vocals and lyrics by Neal and a killer Roine guitar solo leading into a heavier passage that was previewed in the Overture, which fades and allows a bass riff to emerge with a faster beat to introduce…

3) On the Prowl. One of the up tempo segments; a great rock beat (Pete’s bass riff is the star here) guaranteed to be impossible to listen to without getting your feet tapping and/or fingers clicking. Surprisingly the bright instrumental opening leads eventually to some heavy guitars and menacing and threatening lyrics delivered aggressively by Neal.

4) A Man Can Feel. Clearly a Roine song that has Flower Kings all over it and is sung by the man itself. Not a bad piece that continues in the same menacing vein as the previous song and features some very good keyboard and guitar work and becomes quite heavy in the latter stages. All of a sudden the tone lightens with….

5) Out of the Night. A very ‘poppy song’ that has a familiar ‘Beatles Tribute’ feel about it, reminiscent of parts of ‘Bridge’. A light song and Pete is trusted with some of the vocals. (Surprisingly, in the middle of  this light song, Neal is allowed to use a passage from the closing song as a bridge; and it works very well). A repeat of the Whirlwind Theme and some brilliant Roine guitars lead into Neal’s acoustic guitar and naturally forms one of the best transitions into…

6) Rose Coloured Glasses (actually it’s the American ‘Colored’ here). An excellent acoustic song with a great melody by Neal. It’s a classic Morse song delivered with some impassioned vocals, (a viewing of the ‘Making of’ DVD reveals it is actually a penned tribute to his recently deceased father and one of the highlights of the DVD is Neal’s recital of this song to the rest of the band) and there’s also a great guitar solo by Roine. The song ends with a blasting of the ‘Whirlwind Theme’ and fades and one might be excused for thinking this epic is ending but (after only 40 minutes) we’re only half way through (!) as Neal’s swirling keyboards gradually emerge introducing…

7) Evermore. An up tempo eclectic piece delivered by Roine with another Flower Kings sound, there are some truly amazing guitar and (to a lesser extent) keyboard effects. It’s a piece that grows on you and features some excellent driving riffs and guitar work. A brief reprise of one of the themes of the overture provides a seam into…

8) Set us Free. One of the lighter songs with a jazzy feel and a very catchy chorus, with which Pete is trusted again and he does a good job. The end features a repeat rendition of one of the riffs that appeared earlier in the Overture. Neal’s keyboards emerge and introduce a menacing riff leading to…

9) Lay Down Your Life. A complicated Neal song with some complex, heavy driving riffs and a heavy guitar solo. The song to me highlights Neal’s latter Beatles influences and also showcases Neal’s vastly improved vocal talents as the song is delivered a la an angry John Lennon. Almost imperceptibly the tension lightens…

10) Pieces of Heaven. The first instrumental piece since The Overture with a superb marching but slightly comedic rhythm which dies and leads to some effects and to…

11) Is It Really Happening? A strange chanting piece that has the slight feel of the ‘The Wall’ (Is There Anybody Out There?) about it. It also has a slight ‘filler’ feel about it – did ‘Is it Really Happening? have to be repeated quite so many times? But then you realise it was merely the introductory forerunner to something very much greater as the vocals concede and allow a beat and the music to develop into a quite incredible passage that starts with a blinding piece of guitar work and spirals dervish-like faster and faster until it feels that the band can’t possibly control the frenetic pace for any longer. One of the most extraordinary instrumental passages in the history of prog. All of a sudden it ceases and Neal’s grand piano enters to introduce what seems to be the most hotly debated song…

12a) Dancing with Eternal Glory. Definitely a song from one of Neal’s recent solo projects, and therein lies the controversy in the clearly religious lyrics. However you feel about this piece as a fitting conclusion to this project this is unarguably a beautiful song with a haunting chorus and is flawlessly delivered by Neal and the band (including yet another classic Roine solo). Does it really fit in with the rest of this project? Hmmm…not completely sure, but it certainly contains the necessary gravitas for the occasion in my opinion.

12b) Whirlwind (reprise) (Actually the whole band’s rendition of the chorus of ‘A Man Can Feel’ briefly intercedes before the reprise starts.) And this immense piece of work finally ends with a reprise of the title track theme with the lyrics continuing in the same religious context of the previous song. Finally concluding with ‘And from the whirlwind comes the breath of life.’

Well, how do you summarise an album on this scale which has attracted so many diverse reviews and opinions? In my opinion, it’s certainly a truly excellent album and there’s enough greatness in it to be rated as a 5 star ‘masterpiece’.

I would recommend getting the deluxe edition with the ‘Making of…’ DVD which illustrates how the band works together and leaves you flabbergasted as the short timescale of the composition and recording of this incredible piece of music is revealed and helps you to appreciate this band’s outstanding achievement even more.