Following the myriad of remastered and reissued albums of late by Pink Floyd, The Alan Parsons Project, Genesis, et al i was starting to suffer a little from overkill. However, when i got wind that Esoteric Recordings were about to release one of my favourite seventies albums 24-bit digital remastering of Quantum Jump’s eponymous album Barracuda i simply had to have a listen. First of all a big thanks to Vicky Powell at Esoteric Arts for  allowing me to sample this latest reissue. 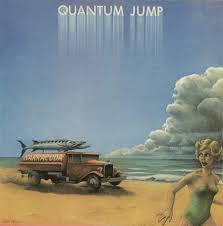 For those who have never heard of Quantum Jump i will leave it to those awfully nice people at Wikipedia to enlighten you as to the bands all too brief history. Quantum Jump were best known for their single The Lone Ranger which for some reason was dropped by the BBC yet plugged to death by the late Kenny Everett.  The nucleus of the band consisted of the hugely talented Rupert Hine/vocals and keyboards, ex Peddlers drummer Trevor Morais and Canterbury scene bass and vocals man John G Perry.

Barracuda was Quantum Jumps second album and pushed the envelope of Prog into different areas ranging from funk to smooth jazz. To achieve such a diverse range of musical styles and textures a host of guest musicians were drafted in to create a forgotten gem of an album. John G Perry’s Canterbury links brought with him Geoffrey Richardson contributing guitars, flute, Viola and whistle to numerous tracks and give the Caravan flavour to the album. elsewhere The Penguin Cafe Orchestra led by the uba talented Gavin Wright added a very special and very English atmosphere to songs like The Seance (too spooky) and Blue Mountain (aloha green sea)  .and the title track Barracuda.

I found that Paschal Byrne’s remastering of this timeless classic was on the whole very good. Songs like the opening gambit Don’t Look Now benefited hugely from a separation of instruments and vocals the opening harmonies having more timbre and depth than the original. I found that slower pieces like those mentioned above all gained a little smoothness and civility thanks to Paschal’s deft touch and insight. The more upbeat songs like Starbright Park, Love Crossed, Europe On A Dollar A Day seemed to benefit less from the digital wizardry. I compared all of the songs to the original analogue version via the vinyl record and much preferred the up tempo songs on the record.

There are four bonus tracks on the disc the first of which is a version of seventies classic Summer In The City which given the Quantum Jump treatment sounds less upbeat than the original though smile inducing never the less Rupert Hine using the lower registers of the piano to give a slightly darker edge to the song. There is also a previously unreleased song which is described as a work in progress and as such sounds a little disjointed and experimental, interesting nevertheless. Remixes of Don’t Look Now and title track Barracuda seem to have been given a new coat of pain with different keyboard voicing for the inclusion in a compilation released in 1979.

Where this release scores big style is the expanded second disc containing a BBC Radio One In Concert recorded at the Paris theatre London in 1977 compared by Bob Harris. this is truly magic. A signature sound of the studio album is the drums and this comes across load and clear via the live performance. Trevor Morais is without doubt a very talented drummer and really adds excitement to both the album and the live performance.  It’s great to revisit Bob Harris’s softly spoken introductions.

Also included on the second disc are alternative mixes of four tracks from the original studio recordings including the single version of Oh My Lord and Loved Crossed (Like Vines In Our Eyes) as well as a 1979 remix of Blue Mountain and Neighbours (Limbo Cottage) the latter tracks i actually preferred to the original. What is striking and more evident on the live songs is the crude sounds of the now primitive keyboard sounds and dates the album in the same way as a fossil.

For the people who missed out on the Canterbury scene or simply didn’t listen to the exponents of the music which emanated from it Barracuda is a great taster even though it isn’t strictly part of the scene. The quirky, humerous and at times atmospheric songs like The Seance (Too Spooky) and Barracuda could well have been included on any Caravan album thanks to Geoffrey Richardson’s cheeky viola playing and may well entice new listeners to seek out both Quantum Jump’s first album and Caravan, Egg and their likes.

I would expect though that Esoteric Recordings expanded edition of this amazing album will be an essential purchase for all those followers who may well have unplayable vinyl copies or the compressed digital versions so badly transfered to CD in the eighties. The transfer here is direct from analogue tape and seems much better than the previous attempt/s. The remastered songs on the album i would describe as safe. Everything is where it should be and it comes across as polished and correct benefiting form high quality reproduction equipment.. Most people will enthuse about the improvement and rightly so, it is a 100% improvement on the original digital transfer though doesn’t have the energy of the original LP. I would recommend it highly for lovers of the album who will enjoy the updated 24 bit upgrade and the bonus tracks not least the live concert on disc 2. Packaging and sleeve notes have to be commended. Mark Powell at Esoteric really deserves a pat on the back and so too does Marco Rossi for his informative sleeve notes.