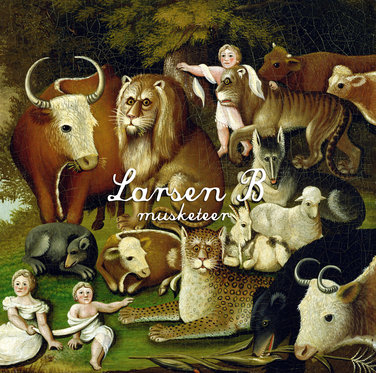 Larsen who i hear you say? Exactly! I have never heard of them either. I happened across these guys whilst attending a China Crisis gig in Newcastle recently and they were terrific. You will be correct in thinking that China Crisis and most associates of do not a prog band make and you would be correct. However, so good were Larsen B I felt compelled to write down my thoughts. As they finished their spot as support band I managed to get to chat with them and pay them a few compliments and by doing so I ended up buying their album “Musketeer”, music from which I had just heard them play.

My impression of the band is that they seem somewhere between The Divine Comedy and Keen. Indeed the second song on the album “Marilyn” has all the hall marks from the intro of “Something For The Weekend” by the said Divine Comedy. I played the whole album twice on the way home in the car. The following few days had most of the songs swimming around in my head and humming quite enthusiastically. My favourite song on the whole album however is without doubt “Robots Learn To Love” which is so simple and interesting.

Mmmm, I could maybe get away with including this wonderfully simple clutch of songs on a prog site by promoting the fact that they are all short stories and have some kind of concept to them. This album has a certain retro feel about it that i find very comforting. Had it been in film i think it would have been black and white. Indeed somewhere on the cover is written old radio tunes. It is a joy to listen to. Eleven well played quality songs in a beautifully presented card sleeve. Well worth investigating. Sound out Larsen B on Facebook.